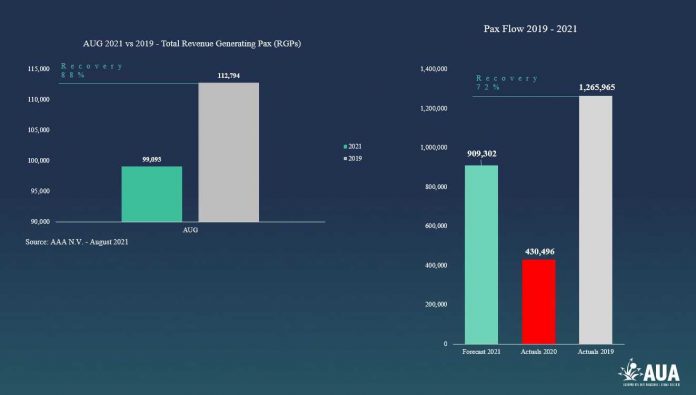 Aruba Airport Authority N.V. (AAA) reports as follows on AUA Airport’s performance for August 2021; yet another strong month of recovery versus the same period in 2019.

An average outbound passenger load factor (PLF) (number of seats of the total seats on board an aircraft that are occupied when departing from AUA Airport) for the US Market of 87% was reported during the month of August 2021, while the average PLF for all markets was at 86% during that same period (in comparison to 2019 where an average PLF for all markets of 85% was reached).

During the past month, AUA Airport averaged 29 flights per day, down from 35 daily flights during the same period in 2019. In that same period in 2020 we only handled a total amount of 218 flights whilst our national border re-opened in July of 2020 for all commercial operations.

AUA Airport is one of the busiest airports in the Caribbean region, with 19 different airlines operating into Aruba contributing in processing over 2.5 million passengers per year (pre-covid) and providing air service to 20 destinations worldwide. AUA Airport is operationally solid where over 95% of all visitors are leisure guests: 83% from the United States & Canada, 6% from Latin America, 8% from Europe, and 3% from Dutch Caribbean, year to date, March 2021. AUA Airport attributes this to the island’s stable economic and political climate, hospitable and multilingual population, and safe environment. AUA Airport undergoes continuous upgrades to maintain its position as one of the region’s most innovative airports.