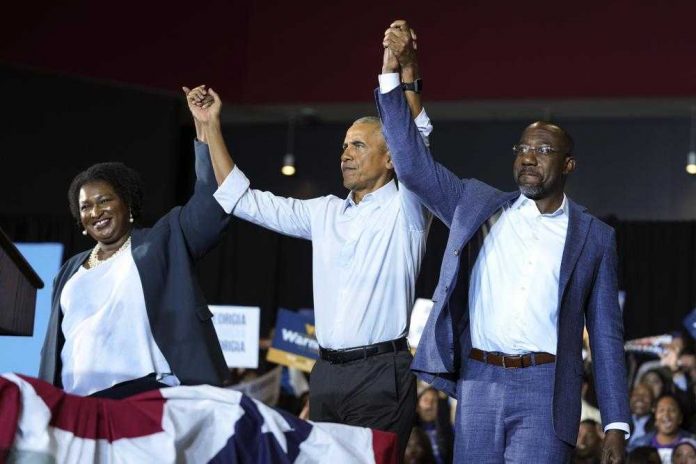 COLLEGE PARK, Ga. (AP) — Former President Barack Obama returned to the campaign trail Friday in Georgia, using his first stop on a multi-state tour to frame the 2022 midterm elections as a referendum on democracy and to urge voters not to see Republicans as an answer to their economic woes.

It was a delicate balance, as the former president acknowledged the pain of inflation and tried to explain why President Joe Biden and Democrats shouldn’t take all the blame as they face the prospects of losing narrow majorities in the House and Senate when votes are tallied Nov. 8. But Obama argued that Republicans who are intent on making it harder for people to vote and — like former President Donald Trump — are willing to ignore the results, can’t be trusted to care about Americans’ wallets either.

With Biden’s approval ratings in the low 40s, Democrats hope Obama’s emergence in the closing weeks of the campaign boosts the party’s slate in a tough national environment. He shared the stage Friday with Sen. Raphael Warnock, who faces a tough reelection fight from Republican Herschel Walker, and Stacey Abrams, who is trying to unseat Republican Gov. Brian Kemp, who defeated her narrowly four years ago.

For Obama personally, the campaign blitz is an opportunity to do something he was unable to do in two midterms during his presidency: help Democrats succeed in national midterms when they already hold the White House. For his party, it’s an opportunity to leverage Obama’s rebound in popularity since his last midterm defeats in 2014. Their hope is that the former president can sell arguments that Biden, his former vice president, has struggled to land.

“Obama occupies a rare place in our politics today,” said David Axelrod, who helped shape Obama’s campaigns from his days in the Illinois state Senate through two presidential elections. “He obviously has great appeal to Democrats. But he’s also well-liked by independent voters.”

Obama tried to show off that reach Friday. The first Black president drew a hero’s welcome from a majority Black audience, and he offered plenty of applause lines for Democrats. But he saved plenty of his argument, especially on the economy, for moderates, independents and casual voters, including a defense of Biden, who Obama said is “fighting for you every day.”

He called inflation “a legacy of the pandemic,” the resulting supply chain disruption and the Ukraine war’s effects on global oil markets — a sweeping retort to Republican attempts to cast sole blame on Democrats’ spending bills.

“What is their answer? … They want to give the rich tax cuts,” Obama said of the GOP. “That’s their answer to everything. When inflation is low, let’s cut taxes. When unemployment is high, let’s cut taxes. If there was an asteroid heading toward Earth, they would all get in a room and say, you know what we need? We need tax cuts for the wealthy. How’s that going to help you?”

Biden has sought to make similar arguments, and was buoyed this week with news of 2.6% economic growth in the third quarter after two consecutive quarters of negative growth.

Yet Lis Smith, a Democratic strategist, said Obama is better positioned to convince voters who haven’t decided whom to vote for or whether to vote at all.

Obama, she said, did that in the 2008 and 2012 presidential elections “by winning over a lot of working-class white voters and others we don’t always think about as part of the ‘Obama coalition.’”

Obama left office in January 2017 with a 59% approval rating, and Gallup measured his post-presidential approval at 63% the following year, the last time the organization surveyed former presidents. That’s considerably higher than his ratings in 2010, when Democrats lost control of the House in a midterm election that Obama called a “shellacking.” In his second midterm election four years later, the GOP regained control of the Senate.

The Atlanta rally brought Obama together with Warnock, the first Black U.S. senator in Georgia history, and Abrams, who’s vying to become the first Black female governor in American history.

In Michigan, Obama will campaign in Detroit with Gov. Gretchen Whitmer, who is being challenged by Republican Tudor Dixon, and in Wisconsin he’ll be in Milwaukee with Senate candidate Mandela Barnes, who is trying to oust Republican Sen. Ron Johnson. Each city is where the state’s Black population is most concentrated. Obama’s Pennsylvania swing will include Philadelphia, another city where Democrats must get a strong turnout from Black voters to win competitive races for Senate and governor.

With the Senate now split 50-50 between the two major parties and Vice President Kamala Harris giving Democrats the deciding vote, any Senate contest could end up deciding which party controls the chamber for the next two years. Among the tightest Senate battlegrounds, Georgia, Wisconsin and Pennsylvania are three where Black turnout could be most critical to Democratic fortunes.