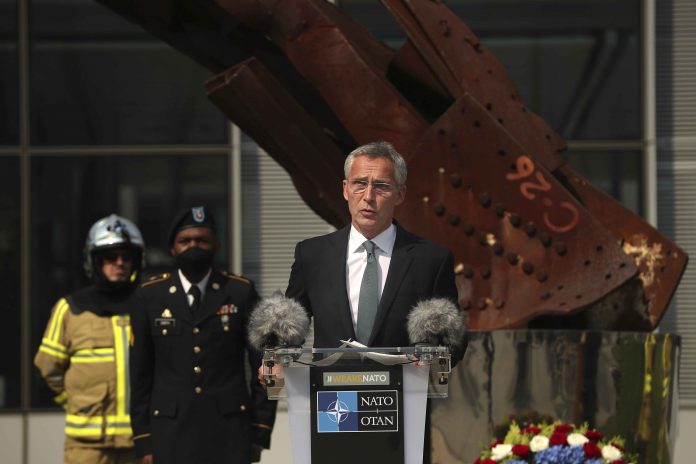 NATO Secretary-General Jens Stoltenberg said Monday that the military alliance is grappling with a dilemma over its future in Afghanistan, as the United States starts pulling troops out while attacks by the Taliban and extremist groups mount.

More than 17 years after taking the lead on international security efforts in Afghanistan, NATO now has around 11,000 troops from dozens of nations there helping to train and advise the national security forces. Most of the personnel are from Europe and other NATO partner countries.

But the alliance relies heavily on the United States armed forces for air support, transport and logistics. European allies would struggle even to leave the country without U.S. help, and President Donald Trump’s decision to pull almost half the U.S. troops out by mid-January leaves NATO in a bind.

“We face a difficult dilemma. Whether to leave, and risk that Afghanistan becomes once again a safe haven for international terrorists. Or stay, and risk a longer mission, with renewed violence,” Stoltenberg told reporters on the eve of a videoconference between NATO foreign ministers.

Under a peace deal between the United States and the Taliban — without the involvement of other NATO allies or the Afghan government – all foreign troops should leave Afghanistan by May 1 if security conditions on the ground permit.

“Whatever path we choose, it is important that we do so together, in a coordinated and deliberate way,” Stoltenberg said, on the eve of a videoconference between NATO foreign ministers where the organization’s most ambitious operation ever will be high on the agenda.

Trump’s unilateral decision to leave only 2,500 U.S. troops with the mission had allied military planners scrambling, as they tried to work out whether NATO could continue to operate in Kabul, and other major cities. NATO diplomats say that for now they have enough “enablers” to get the job done.

NATO defense ministers are likely to make a final decision about the future of the Resolute Support Mission in February, after President-elect Joe Biden takes office. European diplomats expect the tone to change under Biden, but probably not the U.S. intention to leave Afghanistan as soon as possible.

The uncertainty comes amid a sharp rise in violence this year and a surge of attacks by the Taliban against the beleaguered Afghan security forces since the start of peace talks in September. Islamic State militants have also struck this month, notably in a horrific attack on Kabul University that killed 22 people, most of them students.

“We have seen over the last months and weeks several attacks,” Stoltenberg said. “Some are conducted by Taliban, some attacks ISIS claimed responsibility for. But what we know is that the Taliban is responsible for attacks and the level of violence is far too high.”

Even U.S. Ambassador to NATO Kay Bailey Hutchison said: “We do not think the Taliban is keeping its word under the agreement. The violence is too high, and the Afghan people and the Afghan soldiers have paid a heavy price.”

But despite the surge in violence, and deep uncertainty cause by the U.S. drawdown, the peace agreement appears to be an opportunity too good for NATO to miss.

“We now see an historic opportunity for peace. It is fragile, but it must be seized,” Stoltenberg said. “We see an unpredictable and difficult military and political situation. But at least there are now talks.”

At left is Robert Koopman, WTO chief economist, and at right,...