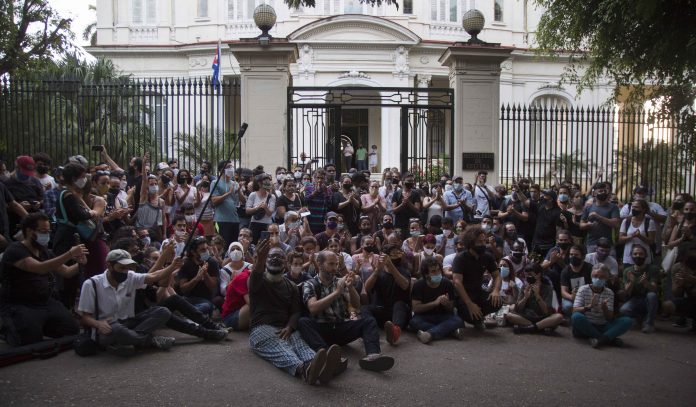 A group of Cuban artists and intellectuals say they won an unusual government vow of greater tolerance for independent art on Saturday after a demonstration in front of the Culture Ministry.

About 20 artists had gathered Friday and the crowd grew to 200 by late night, when Vice Minister Fernando Rojas and the directors of several associations affiliated with the governing Communist Party met with delegates of the demonstrators until after midnight.

The officials agreed to talks on “an agenda of multiple topics with proposals by both sides,” said writer Katherine Bisquet. In addition, “We will be able to meet without being harassed in independent spaces. There is a truce for independent spaces.”

The demonstration, and official willingness to deal with the participants is unusual in a country whose government historically has had little tolerance for open protest, tends to label dissenters as tools of its enemies abroad and has arrested hundreds of them.

But those who turned up at Friday’s demonstraton included people with a long history working in the government-run culture sector, including actor Jorge Perugurría, a star of the film “Strawberry and Chocolate,” director Fernando Pérez, playwright Yunior García and feminist activist Dianelys Alfonso.

There were moments of tension on Saturday when police surrounded the plaza where the demonstration took place and power went off for a time in area, though it wasn’t clear if that was related to the demonstration.

“It is time for dialogue and I think it is important for you young peopleto be heard, and we are going to work for that,” Perugurría said before entering to meet with the authorities.

“The thing that struck me most was the diversity of people from the cultural, political and social fields in Cuba who have been uniting … (on) a series of demands, ” said Michael Bustamante, a specialist in Latin American history at Florida International University. He said that the demands “are very general” and said “not everybody will agree on how to proceed.”

Even so, “In some ways it is unprecedented in recent history” in Cuba, he said, noting that it comes at a complex time for the island, which is suffering through the pandemic, an economic crisis and impending economic reforms, as well as waiting to what policies the upcoming U.S. administration will adopt toward Cuba.

The demonstration followed a Thursday night raid on a house where a group of activist artists were staging a sort of sit-in to demand the release of rapper Denis Solís, who had been sentenced for prison for insulting a police officer.

Officials said they acted to enforce COVID-19 health restrictions because one of those inside had recently returned from the United States and was violating the required quarantine period. None of those removed from the house was reported arrested.

Officials earlier had described the San Isidro group at the house as lacking true artistic merit.

But numerous well-known artists and performers had publicly urged the government to show tolerance and hold a dialogue with the group.

Ontario to close all non-essential businesses

US diplomat Pompeo comes to Europe with a tough Iran message