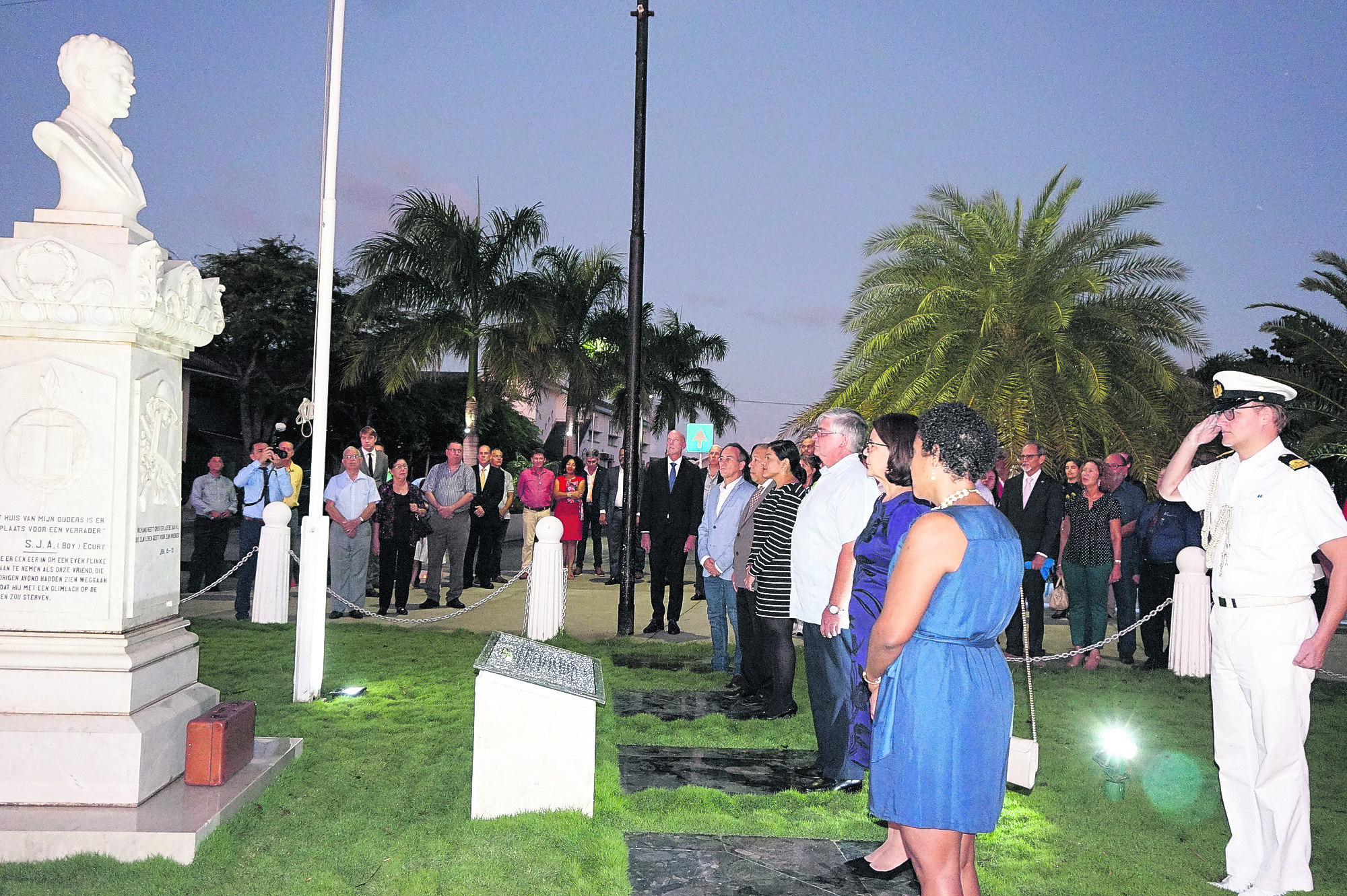 ORANJESTAD – A project dedicated to the national hero Boy Ecury was recently presented at Boy Ecury square. In honor of the memory of the World War II Aruban hero the foundation Friends of the National Archive (Fundacion Amigonan di Archivo (ADA)) and coordinator Daniella Britt organized the event.

Almost two years ago ADA was approached by the National Archive to realize the project in the light of the Year of the Resistance, supported by Dutch organizations. 2018 is the year dedicated to the War Resistance within the Dutch Kingdom, whereas those serving the Resistance during World War II are being honored. The Boy Ecury project was the only project that was created outside of the Netherlands. The project enhances a research and collection of documents about Boy Ecury and his life.

The result of the project was presented by a group of distinguished guests, among them were the governor, Minister of Culture Xiomara Ruiz-Maduro and Yvonne Laclé-Dirksz. Also present were members of the Ecury family. This took place in the park where the statue of Boy Ecury proudly resides. Several speeches and a play were part of the ceremony.

Importance
The director of the National Archive, Raymond Hernandez, is happy with the results of the Boy Ecury project. He expressed hope that with this project, the national hero will be elevated to a higher level. Nearly 75 years ago Boy Ecury passed away in the Netherlands and now community has the chance to know about this war hero and the way it affects thoughts about freedom, war and memorials. The project was carried out under the strict guidelines  set by the National Archive and the Britt, with the help of Shanaya Geerman on digitalization, did a tremendous job. “It shows that the younger generation also have an interest in the work of archiving and that gives hope”, says the director. Ecury’s family played an important role in the achievement of the project as they haven been sharing documents with the National Archive about Boy since 1996. The guide is valuable to those who wish to know more about Ecury. The documents and materials used are kept in the National Archive, as well as the National Library.

Bonus for the Archive
The plus point for the National Archive is that many documents that were in a doubtful condition now have been digitalized, making the information more accessible to the public. In the end the archive’s aim is to inventorize, restore and preserve valuable materials to make thenm accessible to the public. Besides that there is the opportunity to achieve private archives that have a historical value like the one of the family Ecury.

Film & Music
During the event the public could also enjoy a video showing Boy Ecury with some friends enjoying his last Christmas dinner. The video was created in the Netherlands and now forms part of the collection at the National Archive. The theatre play that was performed is directed by John Freddy Montoya and showed the young Boy Ecury while he was hiding from the Germans and writing his experiences and emotions in letters to his mother. Musician and pianist Johhny Scharbaay played the same composition that was to be heard 71 years ago, in 1947, at Boy Ecury’s funeral.