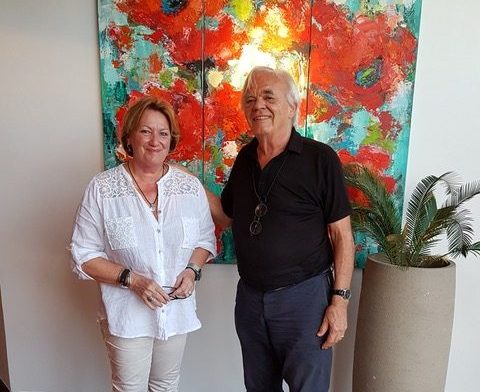 ORANJESTAD — The Board of the Dutch Caribbean Nature Alliance (DCNA) is proud to announce the recent appointment of Ms. Hellen van der Wal as its new Chairperson. The DCNA is a non-profit foundation and regional network created to support and assist nature organizations on the six Dutch Caribbean islands. DCNA aims to safeguard biodiversity and promote the sustainable management of the natural resources of the islands both on land and in the water for the benefit of present and future generations.

The DCNA works with dedicated nature conservation organizations on Aruba, Bonaire, Curaçao, Saba, St. Eustatius and St. Maarten. By creating a united voice and sharing resources, skills and experience, DCNA is able to strengthen the network and support conservation initiatives throughout the Dutch Caribbean. DCNA also aims to provide the parks throughout the region with a sustainable funding future.

“A new Board Chair always has new ideas. It is important that the six islands stick together although that sometimes is challenging due to the constitutional change of the Kingdom and the special position of the BES-islands” explains Ms. van der Wal. Furthermore Ms. van der Wal wants to strengthen the alliance function the DCNA was founded for.

Hellen A. van der Wal was born in the Netherlands and raised in Aruba. The Aruban cunucu (countryside) and the Caribbean Sea were her playground for years. After finishing secondary school on Aruba she studied journalism and law in the Netherlands. In 1990 she returned to Aruba, working at different positions within the Department of Justice.

In 2018 her government career came to an end, when she was appointed member on behalf of Aruba at the Aruban Board of Financial Supervision. That same year she became a board member to the Fundacion Parke Nacional Aruba. Since 2018 she is the representative of the Aruban National Park Foundation in the DCNA General Board. In 2019 Ms van der Wal became member of the Supervisory Board of the National Park Foundation of Aruba. As per 3th of April 2019, Ms. Hellen van der Wal is the unanimously elected Chairperson of the DCNA.

Hellen van der Wal is very much socially engaged. She was one of the founders of the Aruban Children’s Telephone Foundation and was elected Caribbean Representative at the NGO Advisory Council for follow up to the UN Secretary General’s Study on Violence Against Children. In 2005 she founded the Society & Crime Foundation, to promote scientific research and the development of educational material and projects in the field of safety and prevention.

Due to her interest and former career she wants to put extra attention to child participation in nature conservation on the six islands. Other tasks facing Ms van der Wal as Chairperson include finding a new Director, improving governance as well as based on needs and priorities defined by the parks themselves, develop concrete strategies and program outlines.