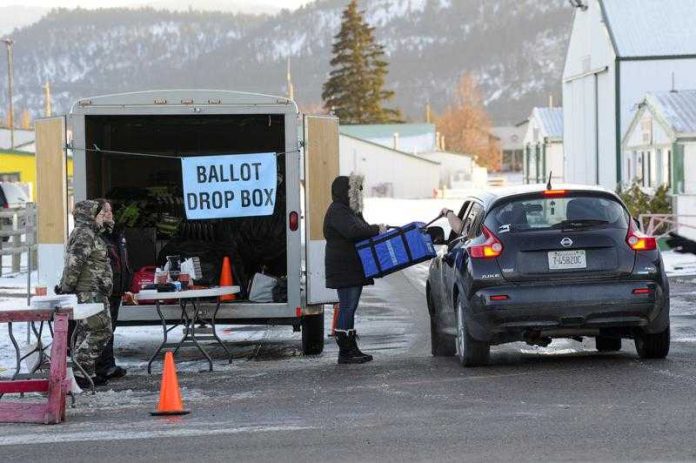 By Christina A. Cassidy and Geoff Mulvhill

(AP) – Voters did not encounter widespread problems on Election Day. That has not stopped former President Donald Trump and other Republicans from falsely portraying minor snags at polling places to undermine confidence in the results.

Trump and GOP allies are distorting the truth about election hiccups that experts say officials handled well, including voting machine malfunctions in Arizona’s largest county and errors in the poll books used to sign in voters in Michigan’s largest city.

“While I think yesterday’s election was smoothly conducted, nobody should assume that those forces, including the former U.S. president, seeking to subvert elections are going away,” said David Levine, the elections integrity fellow at the Alliance for Securing Democracy and a former elections director in Ada County, Idaho.

Since then, the GOP has kept up the rhetoric and laid the groundwork for contesting this year’s midterm elections in an effort to sow doubt about Democratic victories. More than 100 lawsuits were filed across the country before Election Day. Those cases targeted mail-in voting rules, voting machine security and access for partisan poll watchers.

But problems did not materialize on Election Day. The director of the federal Cybersecurity and Infrastructure Security Agency, Jen Easterly, said Wednesday that the agency has “seen no evidence that any voting system deleted or lost votes, changed votes, or was any way compromised in any race in the country.”

After Trump lost Arizona to President Joe Biden by just over 10,000 votes two years ago, he and his supporters peddled a string of allegations about election wrongdoing that crumbled under scrutiny.

Trump and some of his supporters sought to amplify problems with scanning ballots in roughly 25% of polling places in Maricopa County, home to Phoenix and the majority of the state’s population.

“The most concerning thing is the way those isolated incidents are being used to spread mis- and disinformation and lies around the election in an attempt to undermine people’s confidence and faith in the election,” said Sylvia Albert, director of voting and elections for the nonpartisan group Common Cause.

Codes on ballots that were printed too lightly to be read by electronic tabulators caused the confusion. Affected voters were given a choice: Leave their ballots in a locked box at their polling place to be counted at a central office on Wednesday, or take them to another voting center on Tuesday.

Trump seized on the problem in a message on his social network. He said the problem, which appeared similar to a voting issue in New Jersey’s Mercer County, was an effort by Democrats to “steal the election.”

“Every national election you have problems like these somewhere,” said Lawrence Norden, senior director of the Elections and Government Program at the Brennan Center for Justice. “The fact that we’re talking about them the next day speaks to the fact that there was an organized effort to weaponize these types of things.”

The Republican official overseeing the election in Maricopa County apologized for the inconvenience and pledged that every legal vote would be counted no matter which method voters chose.

But Kari Lake, the Republican candidate for governor, told her supporters that they should leave the ballot to be counted later only if they could not wait — and that they should not take it to another polling place.

In a late-night speech to supporters Tuesday, Lake focused entirely on election issues.

“The system we have right now does not work,” she said. “We the people deserve to know on election night the winner and the loser, and we will bring that kind of election back to Arizona. I assure you of that.”

In Milwaukee, a small group of observers at the city’s central ballot-counting facility heckled a local election official Tuesday as she and her staff used a flash drive to export results from vote tabulators.

Election skeptics also focused on a glitch in Detroit. Some electronic poll books used for signing in voters displayed an error message stating that numbers on ballots already had been assigned to an absentee ballot. Poll workers were able to use paper backup poll books when the electronic ones had problems.

“It was identified and resolved quite quickly” and voters who were wrongly flagged were given ballots, said Jake Rollow, a spokesman for the Michigan secretary of state’s office.

Detroit is a Democratic stronghold in a swing state, so turnout there can be key in election outcomes. On Tuesday, Democrat Gretchen Whitmer was reelected as governor. Democrats also won races for attorney general and secretary of state, defeating Republicans who questioned the 2020 election results.

The GOP candidates for governor and attorney general conceded. Trump still urged his supporters to protest in Detroit. Michigan’s secretary of state, Jocelyn Benson, a Democrat who won reelection, said she was heartened that Trump’s call was ignored.

“The former president called on people to protest and no one did,” Benson said, adding that she was relieved to see concessions from some of the statewide candidates who had repeated Trump’s falsehoods about the 2020 election.

“That, to me, is a mark of a successful election — that we had succeeded in running an election that was transparent, smooth and secure so that even people who might have been unhappy with the results still accepted them.”