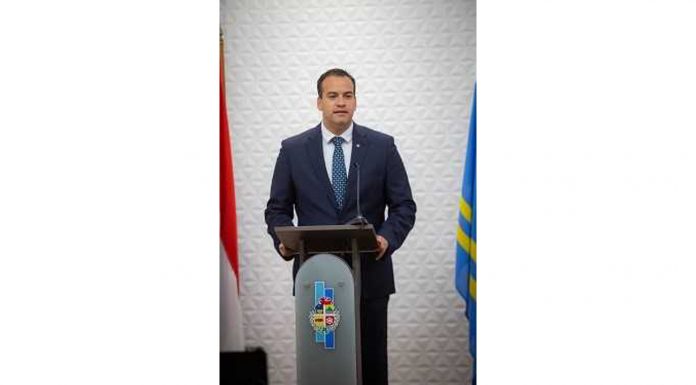 Minister of Economic Affairs, Communication and Sustainable Development, Geoffrey Wever announced during a press conference on Thursday the introduction of a program of financial education, “Finanzas den mi Hogar”.

Wever highlighted that financial education is a very important topic for every citizen’s wallet. In Aruba, financial education as a concept is still not part of the education system, and as a consequence, many people confront financial hardship. As minister of Economic Affairs, he believes it is important for consumers to be well prepared, for them to know their rights and to have financial knowledge.

“As minister of Economic Affairs, on the one hand you stimulate and you want a strong economy, but you also want to have a consumer who is aware of his rights, a consumer who is well protected and knows his position in the market”, Wever said.

In this context, the Government of Aruba finds it very important to stimulate the ability and financial knowledge of every citizen, particularly in his role as minister of Economic Affairs he believes that the economic formation and wellbeing of each citizen is important, and the government wants to contribute to that.

Wever commented that the current situation is not easy in Aruba or in the world. Price of gasoline, water and electricity has gone up as well as inflation, and in this context, the citizen keeps seeing his purchasing power reduced, he sees he was less money to spend. And in this context, Wever believes it is important for the citizen to become more aware of the way in which he spends his money, how he enters financial commitments which will have a long-term impact.

“In this context, we decided to come up with a financial education program in order to give the citizens who are interested in participating in it the possibility to receive a type of training that perhaps before they didn’t have access to. The government thinks it is important to facilitate this”, he said.

The minister of Economic Affairs also presented some numbers illustrating why a financial education program for the citizens is relevant and necessary.

He referred to a report based on a survey executed by Central Bank of Aruba, called “The Financial Wellbeing of Households”, which indicates that 36% of households have financial worries. Tree of each household spends more money than they make, and half of these households are financially fragile and have too much debt.

With this information, minister Wever emphasizes that he wants to illustrate that there are families going through difficult situations and are not well equipped financially. “With this information we reached the conclusion that as a government we have the duty to do this for our citizens, and for this reason we came up with the program of financial education ‘Finanzas den mi Hogar””, he added.

The program will be available in six districts: San Nicolas, Savaneta, Santa Cruz, Paradera, Oranjestad and Noord and will give the possibility to 50 participants in each district to take part in the training. Participation is free and will deal with four topics of finances.

The first topi is “I am effective in my household”, which is focused on how the citizen spends the money that he has at home in his own household. The second topic reflects the subject of “debt payment”. Wever highlights that a lot of citizens have debt in various financial institutions and many times they have so much debt that they cannot pay their dues. The goal of this part of the course is to teach the citizen that when they are in such a situation, they need to approach institutions, reach payment agreements, and avoid that the problem accumulates.

The third topic is “I invest in my future”. Wever indicated that a lot of citizens don’t think about tomorrow and spend everything today. This is an element to teach the citizen to think about tomorrow, to invest in his children’s’ education. And the last topic is “basic budget”, which will be based on the topic of how to create a monthly budget for the household and how the citizen spends his income.

The program “Finanzas den mi Hogar” will take about a year to be completely executed. Each neighborhood will receive these four topics and there will be different nights during one year where they will receive education on this field.

With this program, the government of Aruba wants to demonstrate that the financial wellbeing of the citizens is important and that they believe in investing in the people. “This is a very small step, it’s not a solution for the financial problems, but it’s part of a greater context”, Wever said.

The history and Future of Eagle