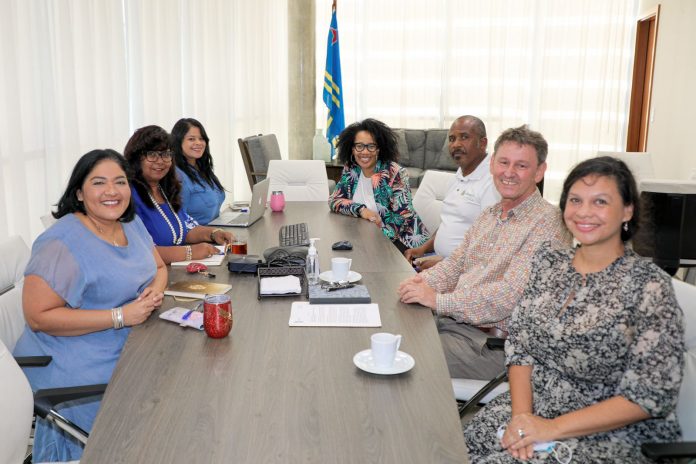 On the first of July, Minister of Culture, Xiomara Maduro, together with Mr. Luc Alofs, Mr. Clifford Rosa, Ms. Nadia Dresscher and Ms. Yolanda Richardson reflected over the topic of slavery in Aruba. This past first of July marked 159 years since the Netherlands abolished slavery in the colonies of Suriname and Netherlands Antilles.

Slavery and its impact on the present is a current topic in the Kingdom of the Netherlands, which also needs to receive the necessary attention in Aruba. To start the necessary dialogue for Aruba, Maduro met with this interest group, which carries out research on the topic of slavery in Aruba.

The objective of the dialogue is to share with the community the information that came out of the research that was already conducted on this topic, to explore the possibility for more research, and also to provide information on the dialogue that is being carried out within the Kingdom, as well as the process that must take place in order that one day ‘an act of apologies’ can take place, as well as a way in which compensation can be given for the historical pain, which was also lived in Aruba, according to the minister.

“It is important for us to be aware of all that happened, so that we can accept that this is a dark part of the shared history of the Kingdom of the Netherlands so we can avoid repeating this mistakes against humanity, which currently are still reflected through discrimination and distinction. A long journey begins with just one step, and for this reason minister Maduro considers the meeting which was held with the interest group as one of the steps to open the dialogue on slavery and its consequences in Aruba.”

Nicole Hoevertsz hands over medals to the international athletes at the...