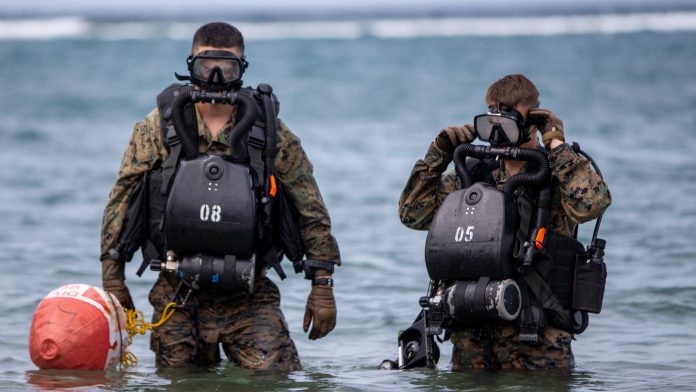 It was previously informed that marines from the U.S will be carrying out various training exercises on the Island of Aruba. The marines have been carrying out these activities during the Caribbean Coastal Warrior 22.

U.S Marines who are part of the 2d Reconnaissance Battalion (Recon. Bn) and 2d Marine Division (MARDIV) recently came to Aruba in order to conduct different trainings along with diving activities with the Marines at Mariniers Kazerne Savaneta also known as Korps Mariniers.

Caribbean Coastal Warrior 22 is a joint training exercise in the Caribbean involving different forces from France, U.S and other regional forces. This type of training allows the Marines to expand their knowledge and proficiency when operating in littoral and coastal regions. Caribbean Coastal Warrior increases the globel interoperability between the U.S Marines, Marine Squadron Carib and Netherlands Marine Corps.

During the training, frogmen from the Marinierskazerne also participated. Frogmen are specialized in operations and long range reconnaissance in amphibious conditions with invisibility as the greatest strength. As a scout, frogmen must be able to transmit information at any given time.

Together with the staff from Korps Mariniers, and the frog models from the Mariniers Kazerne Savaneta, they exchanged knowledge and skills during this annual training.