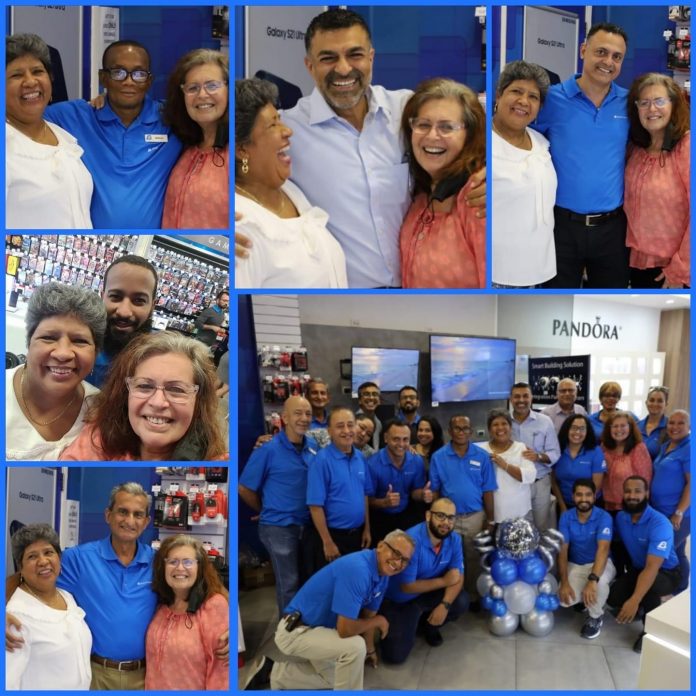 The ability of making rapid calculations while maintaining and giving attention, always with a smile. It can be said that Louise Rasmijn, 65, made sure to elevate being a cashier to a very high level. It’s not for nothing that until now, despite being retired, she is still being asked to come back to work.

Many in Aruba and also abroad know Louise. She was a cashier for 39 years at Boolchand’s. “In reality I worked for 38 years. For a time I stopped working, exactly one year I stayed home taking care of my child. But I couldn’t find myself at home and I was called back, so I went back to work. And they considered it as me being on a long vacation”, Rasmijn said with a laugh. What’s more, for the Boolchand’s family, Louise has been working with them for 40 years. “They thought that number was prettier.”

But how does a person who always worked find themselves at home, something they didn’t want to do when they were younger? The answer is her only granddaughter, Isabella. Louise was married at a very young age, and when she was 17 she went to the Netherlands where she got the opportunity of working in HEMA. “At HEMA I worked as a cashier and I loved the work a lot.”

That experience helped her when she came back to Aruba, where at first she worked at La Modernista. “The place too sophisticated for a ‘mondi’ person like me”, Louise told our reporter with a laugh. On top of it, she didn’t feel like she could sell. Her talent was in managing the cash register. So she went to work at Palais Oriental, where she built a good relationship with the owner who taught her the trick of the trade. The human connection with the owner was something that came of itself, and continued after Louise was approached by the manager of Boolchand’s and offered a job. “I said OK”, and the rest is history.

The transition to the electronics store was relatively simple. Back then, the store was in the Main Street, across Palais Oriental. Louise experienced the entire development of the business and met a lot of customers in electronics.

Louise knows most photographers in Aruba who would find equipment with her and she enjoys the pictures that they take and share on Facebook. But she also met a lot of visitors. For example, a tourist couple who every day came to the store during their stay. On their last day in Aruba, the young woman offered Louise apologies for coming to the store every day. “My husband just wanted to see your smile”, she told Louise.

Another tourist, a Dutch person, was observing interactions with different tourists, be it Brazilian, Venezuelan and American, and told Louise that he was fascinated by the way in which she switched from one language to the next.

And a customer who definitely left a lasting impression was the Wilders couple. The controversial Dutch politician was in Aruba on vacation and came to the store. He was accompanied not only by his wife but also bodyguards, because of continuous threats against his person. But the couple was very curious about Aruba and how Arubans deal with tourism, and so started chatting to the cashier. Even though some people knew of Wilders’ expressions and might not even want to see him in the store, for Louise, it was simple. “He was a customer and you need to treat them well.”

Louise would even receive tips from customers who were thankful for the service, but she didn’t take the money. “I had a pot, ‘client for client’, that I would use if someone didn’t have enough to buy something.” Furthermore, she gave courses to cashiers of other stores to share her knowledge, knowledge that Louise developed herself during her career.

The reason why Louise considers Boolchand’s as part of her family is because it is so, in her experience. “In the past, a business didn’t hire someone if they already have family working. We were precisely the opposite. If we recommend a person, right away they get the job.” Her own child got the opportunity to get a vacation job and one of her nieces also. What’s more, the owners wanted to convince the niece to stay at work because they appreciate the job she does. “This despite the fact that Saskia one day closed the door at 6pm and didn’t let people waiting outside come in. And the person turned out to be the owner.” Instead of getting angry, the owner found appreciation for the young girl, after speaking to her for a long time. She grew in the job and became management assistant.

What Louise Rasmijn considers important for people to realize is how her ex-bosses treat the personnel. Not everyone is aware that they made efforts for everyone. “A lot of people don’t know how the Boolchand’s family would make efforts for all of us. If it wasn’t for my granddaughter I would still be working there.”

And Louise enjoys every achievement of her granddaughter, who with barely two years of age already knows how to send WhatsApp, the proud grandmother tells. A granddaughter so used to her that to take her midday nap she needs to be on her grandmother’s chest.

The same dedication she put into her work, now Louise puts into her grandchild. Does it make her happy? “Super.”