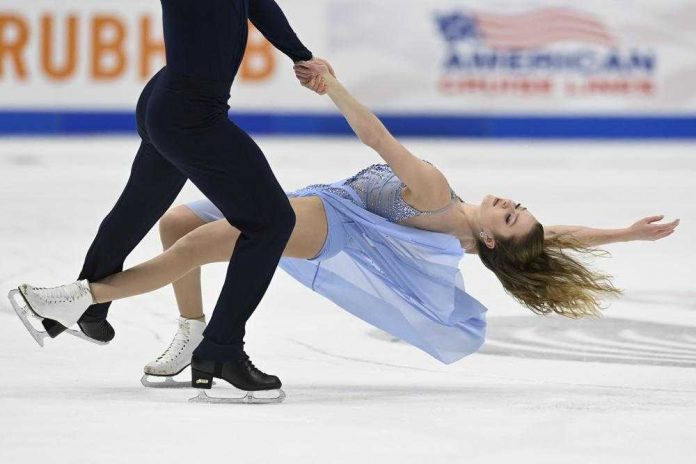 (AP) — Like most young skaters, Brandon Frazier had developed a carefully crafted picture in his mind of what it would be like to learn he finally realized his Olympic dreams.

There was no hugging family members. No tearful celebration with friends. Only a Facetime call with his pairs partner, Alexa Knierim, while Frazier waited for the negative COVID-19 tests that would finally free him from his hotel quarantine.

“I never imagined it like it actually went down last night,” Frazier said Sunday, four days after his positive test forced the pair to withdraw from the U.S. Figure Skating Championships and petition for a spot at the Winter Games.

“But that’s when I knew it meant the absolute world to me,” Frazier said, “because it meant just as much to me.”

Gain-Gribble said she learned the news after finishing “a huge pizza and cookie dough, so I was feeling pretty good.” LeDuc, the first non-binary Olympic athlete, got the call just as he was arriving to his family’s Airbnb rental.

As for Frazier, sitting alone in his hotel room?

“I hugged the crap out of that pillow,” he said with a Cheshire cat-like grin.

There was no drama in the three dance teams picked for Beijing: Madison Chock and Evan Bates will carry the momentum of a record-setting win at nationals to their third Olympics; runners-up Madison Hubbell and Zachary Donohue will try to improve on their fourth-place finish at the 2018 Games in Pyeongchang; and Kaitlin Hawayek and Jen-Luc Baker give the Americans a third team that could stand on the podium next month.

Their selection for the Olympic team also was confirmed Sunday, shortly before the men’s free skate at nationals.

“It’s the honor of a lifetime. It’s the greatest honor we can achieve in our sport,” said Bates, who will make his fourth Olympic trip after going in 2010 with former partner Emily Samuelson. “We’re fortunate to go back for the third time, or fourth time, but it never gets old. It’s always special each time.”

Unlike their teammates, Hawayek and Baker will experience the Olympics for the first time. It’s been a long and difficult road for the pair, both of whom have come back from concussions, including Hawayek’s this past summer.

“With full transparency, I didn’t know what the course of the injury was going to look like as we entered the Olympic season. There was a lot of doubt whether we’d be able to get back to a competition-ready place,” she said. “I think we’ve set ourselves up to continue to grow as the winter went on.”

All three American teams, who are close friends as much as rivals and training partners, work under the watchful eyes of Marie-France Dubreuil, Patrice Lauzon and Romain Haguenauer at the Gadbois Centre in Montreal.

Also training there are 2018 Olympic silver medalists Gabriella Papadakis and Guillaume Cizeron, the French ice dancers who had the highest scorer of the Grand Prix season and likely their biggest competition in Beijing.

The three American teams plan to spend the next three weeks in Montreal, putting in the final work for Beijing. But the biggest goal is not so much fine-tuning their midline step sequence, tightening their synchronized twizzles or working on their lifts. It’s ensuring they stay healthy with COVID-19 running rampant.

“We’re in our bubble, doing what we can control, and right now the No. 1 concern for all of us in the next 20 days is to be healthy,” Hubbell said. “We all have to travel and be on an airplane and be around people, and certainly COVID is our No. 1 concern. It’s the next thing that can stand in the way of all our dreams. We’re going to be as diligent as we can be to do our best and represent Team USA with honor.”