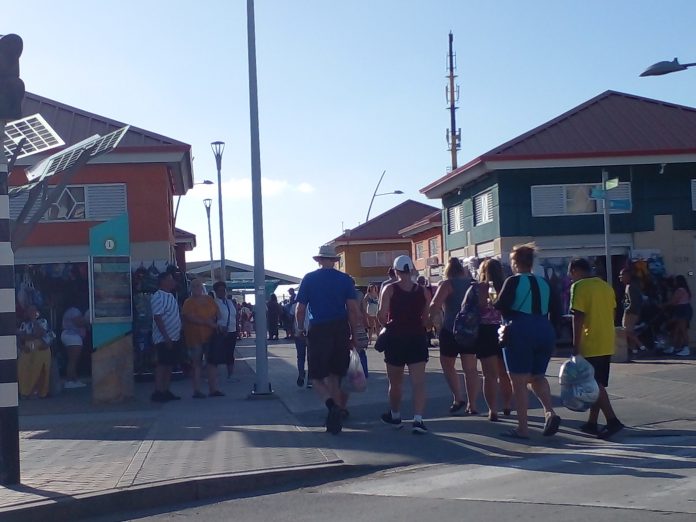 Yesterday morning on local and social media, once again complains were being voiced regarding nuisance caused by sewage and bad small in the city center, in the area where cruise tourists are received.

The problem of sewage and bad smell continues in this area, which is heavily trafficked by tourists from cruise ships docking in the terminal nearby. Yesterday three different cruise ships visited our island, bringing more than 12 thousand tourists. However, these visitors had an uncomfortable surprise with water and an unpleasant smell.

Our reporter went to the area and spoke to some of the workers at the kiosks regarding this problem. One of them said that this is a problem against which they have been fighting for a long time already, and the government still has not come with a solution.

“Every time that it rains it becomes a problem. The smell is unbearable and the tourists have to walk in the sewage water and deal with the terrible smell. Imagine a tourist becomes sick or gets an infection because of the water? It would be a very bad experience and negative propaganda for Aruba”, they said.

The worker, who chose to remain anonymous, explained that today they had the option of putting pallets on the areas that were covered in water to help the tourists walk, cross the street, etc. But it is not always that they have pallets available, and that means that sometimes the tourists have to step on the water in order to reach the kiosks.

Another worker at a kiosk in the area said that aside from the problem of sewage water and bad smell, they also have a problem with trash. As tourists buy food and drinks, often they leave the packaging discarded on the sidewalk or placed somewhere other than in a trash can. “Most of the times, the salespeople ourselves pick up the trash because otherwise it would still be there. I have called DOW (Department of Public Works) many times myself, but they don’t do anything, they don’t help. It is really annoying and it looks bad”, the worker complained.

Meanwhile the workers keep waiting for a solution for this problem, which they consider a big nuisance and a danger to public health.

Cruise Ship tourism has recovered with 61% compared to the first...