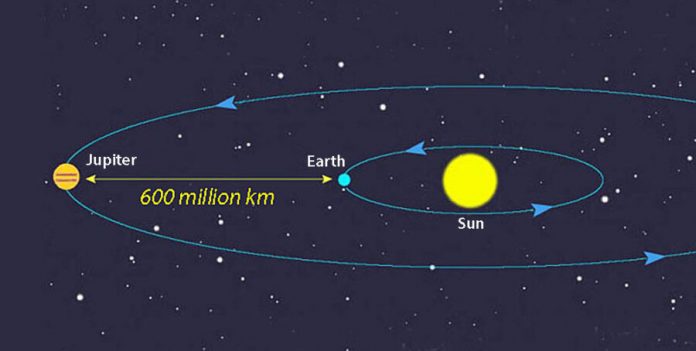 On Monday the 26th of September, Jupiter reached its closest point to our planet Earth which is called; Opposition. The last time this took place was 59 years ago. However, the fact that we are passed the 26th doesn’t mean you can no longer see the planet; we will be able to enjoy planet Jupiter until the end of this year!

Jupiter reached its position in its orbit which is called ‘Opposition.” This means that planet Earth will be directly between Jupiter and the sun, with the sun making the planet much brighter in our skies. At the same time, it will be closer to us in general.

Normally, Jupiter is on ‘opposition’ every 13th day of the month. However neither planet, being Earth and Jupiter, orbits in a perfect circle, reason why every ‘opposition’ has a different distance. The distance between our planet and Jupiter will vary between a shorter distance, which was on the 26th of September, which is 600 million kilometers and the furthest distance of 965 million kilometers.

When and where can you see it?

The planet Jupiter will be visible all days until the end of this year after 7pm on the eastern side of the island. The best time view this planet is when it’s directly position above us, which is between 10pm and 12pm. As the days pass by, Jupiter will rise higher and higher in the sky.

Jupiter will be visible with binoculars or a small telescope. With a small telescope you would be able to see not only Jupiter but also Jupiters 4 moons named the 4 Galilean moons after Galileo Galilei discovered them, namely Callisto, Lo, Europa and Ganymede.

Just for the fun of it: Fun Seekers return