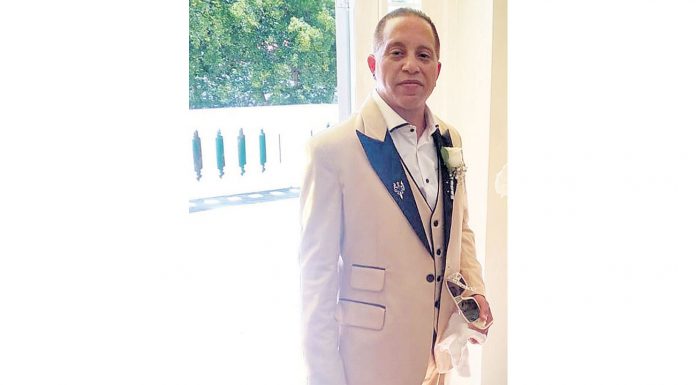 Even though he has faced many situations in his life and was diagnosed with schizophrenia, a mental condition which causes him to hear seven different voices, he managed to overcome and live with them every day. Now, Jeremy Ruiz feels happy and at peace.

In an interview with our reporter, Jeremy Ruiz said that six years ago he gave a presentation to the director of Aruba’s correctional facility, KIA, and to some departments. Now Ruiz is on vacation in Aruba, to marry his partner Jennifer. Here he explains that he likes to come back to Aruba to tell those who are interested how he sees certain aspects of his life, and he always like giving back to Aruba.

Ruiz told us he was born in the Netherlands and came to live in Aruba as a child. But when he was 25 years old, he decided to go to the Netherlands in order to get a better understanding of the mental condition from which he was suffering, schizophrenia. Living back in the Netherlands, Ruiz learned to see his condition in a different way, “in a more positive way, not like an illness, but like something to deal with that doesn’t necessarily require medication”.

He categorizes himself as a ‘voice listener’, because he hears seven different voices every day. He is aware that he has been hearing them for five years now. When he was a child, at 13 he began experiencing with addictive substances, and when he was 19 he was sent to a rehabilitation center in Santo Domingo, and this is how he was diagnosed with schizophrenia. “I think that was when I was around 21 or 22”, he says.

Ruiz says that nowadays in psychiatry when a person receives a diagnosis of hearing voices in their head, that’s usually a symptom of another problem – as happens with people who experienced trauma or who are addicted to alcohol. As time went on, he began taking medication to try to remove the voices from his head, but never succeeded.

“Instead, I started suffering secondary effects from the mediations, my tongue would swell, every three days I could sleep because the medications were accumulating in my system and I couldn’t get up because of them”, Ruiz says.

In the Netherlands he met groups who see voice hearing as an experience of special senses. Ruiz says that there are also people who feel things on their skin, for example. Came a time that the amount of voices he was hearing increased, and now he hears seven different voices. “My mind projects a form for them, and just as when I speak to people, I can see them when I speak with them.”

He declared that his family has been a big help in his life and they accept that the voices are part of him, and are not trying to change him. “They always loved me, even though they might not understand or know, as a mother, father or partner, they don’t know what it is because they can’t feel nor see it. But they know as a partner to accept the behavior, the thought, the daily life, because every day from when I wake up in the morning until I fall asleep at night – I even dream with the voices”, he says.

Ruiz is a person who gives lessons and guidance to people who are residents of mental health facilities in the Netherlands. “I try to help them when they have to deal with problematic or annoying voices. Each day I let the loudest voice, the one that needs the most attention – for which I have a collection of text, paintings, something on which the voices feel reflected – and this way my relationship with the voices changed. Instead of being my enemy, they became a friend. I’m conscious that each voice has its character and their own way of being. I have one that I call the pessimist; he can never see things in a good way. But with time I learned to use what he says to help me.”

Ruiz says that before he felt less in control because he didn’t understand the situation, but through reading books and learning from experience at the same institute where he received help, he got the opportunity to start in the school system, six years ago. Each time he starts with a new class with a new group in three different places in the Netherlands, he gives lectures and presentation. “The basis is that the one who went through the experience can help another to deal with their experience”, he says.

Regarding the mental health system in Aruba, Ruiz says if he hadn’t received help 16 years ago, he wouldn’t have made it to the Netherlands. “Fundacion pa Maneho di Adiccion (Addiction Management Foundation) in Sero Colorado coached me, that’s where I came from. They helped me prepare to go to the Netherlands. Even though I don’t live on Aruba now, that helped me to go as far as I went, together with my father. Although there might be people who say this isn’t fruitful, I can say that it did work for me.”

His message is that “sometimes, people need to see certain life lessons and certain things that happen with people in Aruba, and remove the taboo to talk about the subject. Just giving something a name, and then act like it doesn’t exist by giving medication or keeping someone at home is not a solution. My mother and father made sure that I could go to the Netherlands and still have a study in sport. That’s where I began finding psychological and psychiatric help, where I said I no longer wanted help to silence the voices. They heard me, over there organizations help in different ways, they see it differently. I found something that allows me to live at peace, I don’t feel negatively towards it and it doesn’t break me. Since I made peace with the voices I hear and their influence on my character and way of thinking, I feel happy. I just got married, I have a twelve year old son, and I feel happy and at peace.”

This week’s Happenings are all Christmas vibes and more!