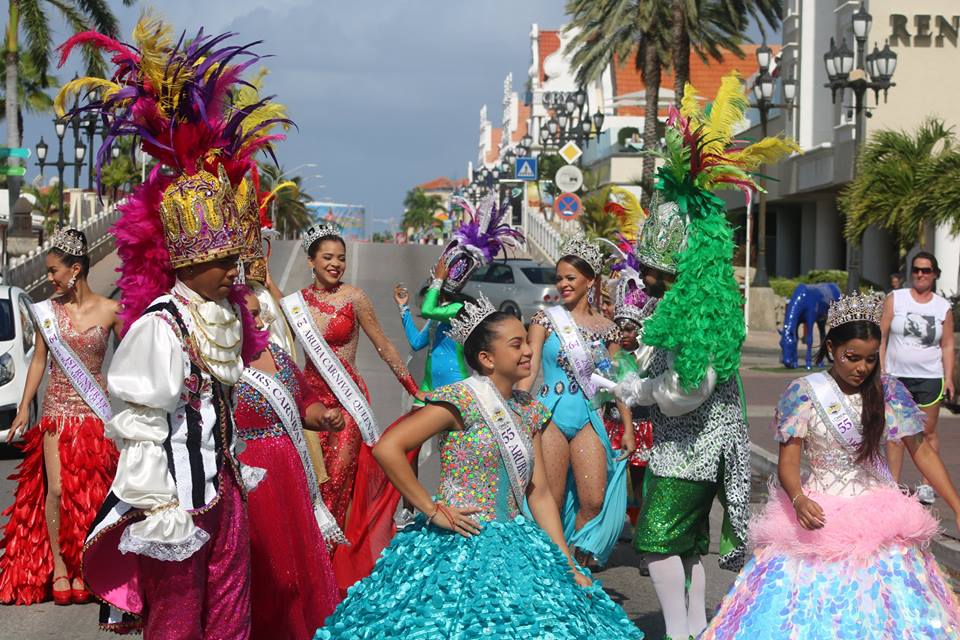 ORANJESTAD – While the official opening of the carnival season took off with the Torch Parade at January 6, the island caught the carnival fever and since then entered a series of carnival events that go on until February 11. What has been past weekend and week: the pre-finals of the Caiso & Soca Monarch and the Grand Final yesterday evening, Aruba Carnival Queen & Mrs. Carnival Election last Saturday and the Children’s Parade in Noord yesterday. Coming up from tomorrow until Sunday: Hebbe Hebbe Fest, Jouvert Morning & Pyjama Party in San Nicolas, Aruba’s Grand Lighting Parade in Oranjestad and the Grand Children Parade San Nicolas. Get a taste and join in on our biggest cultural phenomenon.

Last weekend the Queen & Mrs. Were chosen for the coming parades. Queen of this year is Marsheline Kock, she represents the carnival group Superfood. The Mrs. Carnival is Shaira Lacle from TOB carnival group. Both queens were crowned by our Prime Minister Evelyn Wever Croes. The children had their blast too as in Noord the Children’s Parade took off. Amazing creative costumes and dancing kids on uplifting music were the ingredients of this entertaining parade. Something that is taken very serious in the island is the election of the Caiso & Soca Monarch. The island’s greatest music creators go head to head each year in an epic musical battle, and only one Monarch of Soca and one Monarch of Calypso are crowned. The winners this year were Tony Mingo from Le Groove as the Soca Monarch, and Blacky from Tsunami as the Calypso Monarch. And in the end there will be only one Road March Champion.

Calypso is a style of Afro-Caribbean music that originated in Trinidad and Tobago during the early to mid-20th century. It lays its roots in the West African Kaiso and the arrival of French planters and their slaves from Dominica and Martinique. Soca is a style of Caribbean music originating in Trinidad and Tobago. Soca originally combined the melodic lilting sound of calypso with American soul (SOulCAlypso:SOCA) and the cadence music from Dominica and the French Antilles. The Carnival Road March is the musical composition played most often at the ‘judging points’ along the parade route during Carnival. Originating as part of Trinidad and Tobago Carnival, the term has been applied to other Caribbean carnivals. (Source; Wikipedia).

As from yesterday the island is under the power of our Prins & Pancho. During this Transfer of Commend, that took place yesterday morning, the Prime Minister opens the reign of the royal court by handing over the keys of the island to the Prince. Obviously this is a symbolic state in the light of carnival season.

Are you curious about the carnival ambiance and would you like to join a warm-up party, than Hebbe Hebbe Fest on Thursday February 1st in Oranjestad is your thing. It is said to be the biggest carnival concert of Aruba with the most popular bands for free. Something completely different is the by locals very popular event Jouvert Morning & Pyjama Party in San Nicolas. In the early morning of Saturday February 3, at 4 am, thousands of people come together by the so-called ‘pyjama party’, the largest ‘jump-up’ during the carnival season. Live music caravans are followed by a dancing crowd through the streets of San Nicolas. Only some hours later you can continue the carnival fever as Aruba’s Grand Lighting Parade in Oranjestad starts at 8 pm. A sea of lights will shine in the night with this amazing parade. Sunday you can enjoy the little ones in their carnival set up while watching the Grand Children’s Parade in San Nicolas and in the evening takes place the Buring of Momito at Carnival Village in San Nicolas. He is the children’s spirit of carnival and with the last children’s parade a puppet will be burnt in order to announce the end of the children’s carnival season.

The island is known for its white-sanded beaches and perfect climate, but there this time in the year Aruba draws thousands of visitors. If you have never been here before, come in carnival season as your experience will be amazing. Sensational musical events, queen elections and different parades are all part of this spectacular phenomenon. Carnival is part of Aruba’s history and cultural heritage, actually it is the largest cultural festival on the island. For the islanders it is a way to express their creativity and break away from the daily buzz of life. Dancing to the rhythm of local music while enjoying the ambiance of the public are some of the ingredients of this festival. Oranjestad and San Nicolas are the stages for this display of unique designed costumes, amazing ambience and upbeat, local music. The festival is for everybody accessible and safe to visit. Behind the screens there is an enormous organization that makes sure that this festival runs smoothly. The police, inspection department, Red Cross volunteers, garbage service and many others work day and night to make sure that carnival is a success. All the trailers are being carefully inspected before they are allowed to participate as well as the vehicles that pull them. After each parade the streets are being cleaned and road blocks are being taken away so next day normal traffic flow occurs. The several organizations and institutions work together with the official carnival organization SMAC.

In the 1920’s the first carnival events were organized by social clubs that started private costume and masquerade parties. This year we celebrate Aruba’s 64th carnival, which means that the first grand parade took place in 1955. Since then Aruba’s carnival has grown big and is now able to stand shoulder to shoulder with the most renowned Carnival celebrations around the world.

Happy Community Initiative supports qualified after-school programs: “This program helped me in everything, it built me strong”

Pilot project of the Aruba Tourism Authority: First group of the...

Aruba to Me: Marge Wiener

Contemporary Art at the National Library of Aruba