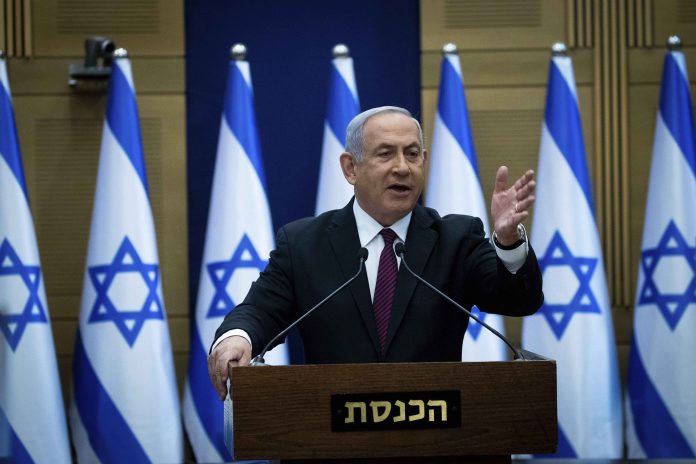 Israel took a major step toward plunging into its fourth national election in under two years on Wednesday as lawmakers — supported by Prime Minister Benjamin Netanyahu’s main coalition partner — passed a preliminary proposal to dissolve parliament.

The 61-54 vote came just seven months after the coalition took office following three inconclusive elections in just over a year. Netanyahu’s Likud party and Defense Minister Benny Gantz’s Blue and White said they were seeking national unity to confront the coronavirus crisis. But since then, the rivals have been locked in infighting.

The vote gave only preliminary approval to ending the alliance and forcing a new election early next year. The legislation now heads to a committee before parliament as a whole takes up final approval, perhaps as soon as next week. In the meantime, Gantz and Netanyahu are expected to continue negotiations in a last-ditch attempt to preserve their troubled alliance.

By joining the opposition in Wednesday’s vote, Gantz’s party voiced its dissatisfaction with Netanyahu, accusing him of putting his own personal interests ahead of those of the country.

Netanyahu is on trial for a series of corruption charges, and Gantz accuses the prime minister of hindering key governmental work, including the passage of a national budget, in hopes of stalling or overturning the legal proceedings against him. Gantz and other critics believe Netanyahu is ultimately hoping to see a friendlier parliament elected next year that will give him immunity from prosecution.

Opposition leader Yair Lapid, whose Yesh Atid party sponsored the bill to trigger new elections, accused the government of gross mishandling of the coronavirus crisis and its economic fallout. He said the one thing all citizens share is “the feeling that they lost control over their lives.”

The government still has not yet passed a budget for 2020, a result of the deep divisions produced by its power-sharing agreement. The lack of budget has caused severe hardships and cutbacks for Israelis at a time when unemployment is estimated at over 20% because of the pandemic.

In a nationally broadcast news conference Wednesday evening, Netanyahu delivered a mixed message, calling on Gantz to remain in the government but also sounding very much like a politician on the campaign trail.

Netanyahu began his address by claiming credit for leading the battle against the coronavirus, forging diplomatic agreements with Gulf Arab countries and protecting Israel against its enemies in the region.

He derisively referred to Gantz’s party as “an opposition within the coalition” and skirted around questions about passing the budget or honoring the rotation agreement with Gantz.

“In dramatic times like these, we don’t need to go to elections. The people of Israel want unity, not ballots. It wants vaccines, and not campaign ads,” he said. “The only way we can defeat corona is defeating it together. We need to put politics aside.”

Gantz, meanwhile, released a video blaming Netanyahu for the political paralysis and economic damage resulting from the pandemic.

Israel has gone through two nationwide lockdowns since March, and officials are already warning that rising infections could result in a return to strict restrictions that were only recently lifted.

If a budget for 2020 isn’t passed by Dec. 23, Israeli law stipulates an automatic dissolution of parliament and new elections three months later in late March.

Under the coalition deal, Netanyahu is to serve as prime minister until November 2021, with the job rotating to Gantz for 18 months after that. The only way Netanyahu can hold onto his seat and get out of that agreement is if a budget doesn’t pass and new elections are held.

There were no indications that either side is interested in preserving their partnership for the long run. Instead, the battle is expected to be over when the election will be held.

Although Gantz’s party has plummeted in opinion polls, he appears to have concluded that elections are inevitable and the sooner they are held, the better.

By pushing for an election early next year, he seems to be banking that Netanyahu will be punished by voters for a still-raging pandemic, a struggling economy and the resumption of his corruption trial.

Starting in February, Netanyahu’s corruption trial is scheduled to kick into high gear, with a string of witnesses testifying against him. The prime minister expected to be a frequent visitor to the courtroom.

Netanyahu, on the other hand, is expected to try to drag out budget talks to delay elections until the summer in hopes that a vaccine will arrive and the economy will begin to recover. If he can put together a hardline coalition at that time, he might finally be positioned to push through an immunity bill or appoint new judicial officials to freeze or overturn his case.

One wild card in any Israeli election will be the administration of President-elect Joe Biden.

Netanyahu has had a close relationship with President Donald Trump after clashing with President Barack Obama for the previous eight years. Israeli officials fear that Biden, who was Obama’s vice president, will return to the policies of that era, especially renewing possible diplomatic engagement with archenemy Iran.

Tashir said this would be a “big issue” in the next Israeli campaign.

“Netanyahu is going to put forward an argument which says ‘I’m the only Israeli leader who can actually stand up against a Biden administration,'” she said.

Morocco: 5 migrants dead in stampede in bid to enter Melilla