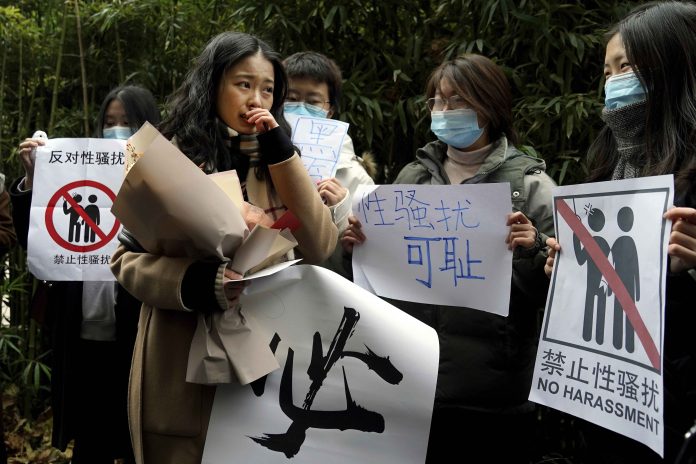 A Chinese woman who filed a sexual misconduct lawsuit against a TV host told cheering supporters at a courthouse Wednesday that she hopes her case will encourage victims of gender violence in a system that gives them few options to pursue complaints.

Zhou Xiaoxuan spoke ahead of a trial in her lawsuit, which was delayed for two years and reflects the challenges Chinese women face in pursuing sexual misconduct complaints despite the spread of the global #MeToo movement.

Zhu has denied the accusation and filed a defamation case against Zhou.

“Even if ultimately in this case we don’t get a legal win, as long as we can show to a lot of people (that) there are people like me, those of us who are victims of gender violence, that’s already a type of win,” Zhou said outside the Haidian District People’s court in Beijing.

A verdict was not expected on Wednesday.

The movement took off in 2018 in China when a college student in Beijing publicly accused her professor of sexual misconduct.

The #MeToo global movement helped encourage activism in China, but came at a time when President Xi Jinping’s government is tightening controls and stamping out dissent.

Women who complain face censorship and official resistance. The movement has seen few victories, and it was only in 2019 that sexual misconduct was added to court regulations as grounds for a suit.

In a rare victory, a woman who used the alias Liu Li won a case against her former boss in July. The boss, a social worker in the western city of Chengdu, was required to issue a public apology but no damages were awarded.

“Together, we want to demand answers from history,” read a sign held by a few dozen supporters outside the courthouse in Beijing on Wednesday. Others carried #Metoo signs.

Many yelled “jiayou,” or “add oil,” a common Chinese phrase as reassurance to Zhou, who cried after speaking.

Videographers working for foreign news agencies were taken away by police soon after Zhou gave her statement. It was unclear why they were held.

Brazil’s Lula gets married at 76 with a political touch

Mexico: Thousands stay in to protest violence against women