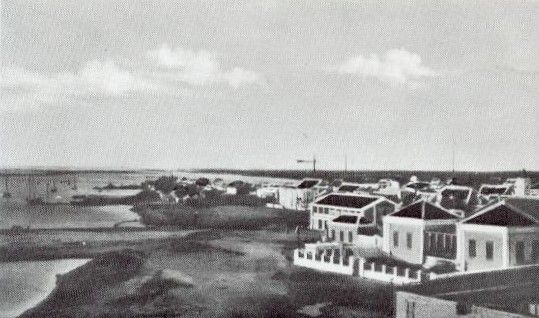 The Reverend Bosch, whose historical untrustworthiness has been mentioned before, possesses the merits of his demerits. He is a great hand at giving most charming descriptions. According his comments here is the Aruba of about 1825:

-“The Arubans are simple, obliging and honest. The engagements they enter into in matters of trade, though they undertake to comply with them only by word of mouth, are met in the most loyal manner, to which the Jews do not make an exception. On other grounds they occasionally quarrel with each other, which, of course, is no more than can be expected because of the double friction exiting here, partly arising from the smallness of the society to which the more prominent persons here are confined, partly from family relations. Since they continually intermarry the majority of the more important residents are brothers-in-law or cousins. However, I was greatly pleased to note that a family –estrangement of which I had become aware during one of my journeys on Aruba, had ceased to exist on my making the next. Their way of life is of the most monotonous; the uniformity of the climate, only varied by a rare downpour of rain, is largely contributive to this. With a very few exceptions people do not pass their time reading, also because they wrongly interpret an antique maxim, having been informed by their forefathers that reading may drive man insane”.

“A vessel arriving from the opposite coast periodically breaks the monotony of this life and occasions an interchange of questions and bits of information. An arrival from Curacao, however, causes a much greater stir, for such t one not only provides oral information, but also brings letters and the Curacao paper. If any of the inhabitants has been himself to Curacao, there is much he can tell on his return about the great buildings, the many carriages, the splendor of attire and furniture’ nor does he omit so speak of how he paid his respects to the governor, and especially of how cordially he has been received by the secretary. He or she would be sure to go more frequently to Curacao; but the laborious struggling against wind and current in a small vessel causes people to be afraid of the sea”. Pic.3. A day in Life in Curacao in the epoch

“From time of years the commander has been the island’s oracle and the man in whom all power and authority repose. He used to have at his disposal, besides two soldiers guarding the fort, the so-called captain of the Indians, a white native was the executor of his commands. He settled every dispute, often even those arising within a household.

On my first visits to Aruba I attended several sessions of the Court, whose proceedings made me laugh heartily, the cases dealt with testifying to the simplicity of those in the lower stations of life. A woman lodged a complaint with the commander against some of her neighbors who had thrown stones at her cottage. She had taken “the corpus delict along”, a basket full of big stones of the kind that is to be found in the environs of the bay by the thousand”. Pic. 4. When rum, the sugarcane champagne of pirates and sailors was in abundance

“Another time I heard the commander chides somebody and tells him that the commandments said a child should honors its parents. I did not rightly understand this allusion believing the man in question to be the parent for he was over fifty years old, but somebody else was fetched, a man of seventy or over, who, however, was agile and strong. This was the real father, who had lodged a complaint with the commander against his fifty-two or fifty-three ear old son- master of a vessel- for having called him bad names. After plaintiff and accused had been heard in due form, they were both sent away with a reprimand. The father, as it turned out, was not entirely free from blame himself; during that quarrel with his son he had been in his cups, which was of rather frequent occurrence as his craving for rum was increasing rather than decreasing with advancing years”.