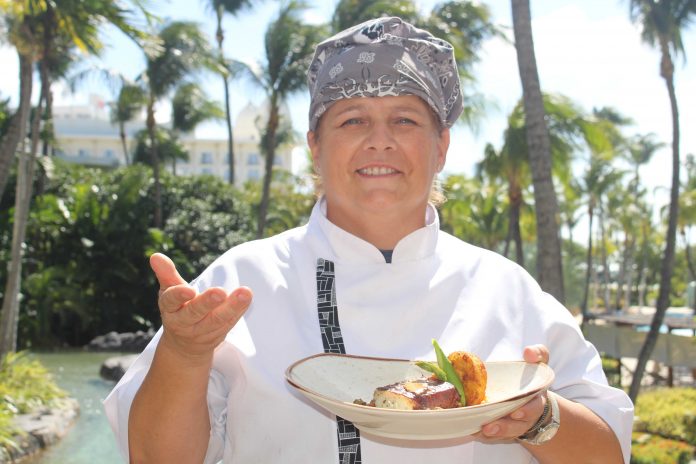 A special menu in honor of International Women’s Day will be offered at the Sunset Grille, Hilton Aruba Caribbean Resort & Casino, March 8th to 12th. The menu was created by French-born Executive Sous Chef Katia Soujol.

Chef Soujol joined the culinary brigade of the resort a number of years ago with a commitment to bring her vast knowledge including grandma’s traditional bouillabaisse and ratatouille recipes, to the kitchen, and pass them on to the next generation of Culinarians in Aruba.

The chef who hails from Provence, France, started cooking with her grandma in the countryside, then later followed her passion and her heart and graduated from the Culinary Institute in Nice, France.

From then on she garnered impressive accolades everywhere she went; from Master Chef of France, to Top French American Chef. Her nomad career took her to great Michelin restaurants in France, the UK, and Germany, and midway she joined Hilton in Colorado and later on in California, USA, combining her career with teaching Culinaria at the Art Institute of California and Long Beach Community College.

Her career continued to evolve as she spent time at famous Chef Pascal Restaurant in Newport Beach and served as Executive Chef of Pastis Restaurant in West Hollywood, California, later relocating to the Beverly Wilshire Hotel, a Four-Seasons Resort in glamorous Beverly Hills.

Chef Soujol shares that during one of her trips to China, she volunteered in a number of orphanages. Following the devastating earthquake on April 2015 in Nepal, she was compelled to volunteer for food and supplies delivery in the mountains surrounding Kathmandu. Katia is grateful to report that she survived the May 12th aftershock of the 7.3 magnitude earthquake.

That adventure, along with many others, including; cooking in Hawaii, Vietnam, Cambodia, China and India, appearing in many magazines, radio and TV shows, promoting her special recipes, and making guest cooking appearances surely prepared Soujol for her role in Aruba, as Executive Sous-Chef at Hilton Aruba Caribbean Resort & Casino.

And while she admits that at first she had no clue where the island was located on the map, when the offer came, she was happy after two decades of traveling, to settle down on the One Happy Island.

Chef Katia reports that raditional Aruban recipes and ingredients are at the heart of the special menu, and as food is constantly evolving, changing as much as all living, breathing arts, she created a new fusion, peppered by her French flair, multicultural influences, and a womanly touch. It’s the New Aruban Gastronomy, she adds.

The Sunset Grille delivers quality food and gracious service, with seating indoor, and outdoor on the open air wrap around terrace. Open seven days a week, from 5:30pm to 10:30pm.

Reservations can be made at hiltonconcierge@depalmtours.com or by calling +297 526 6612. 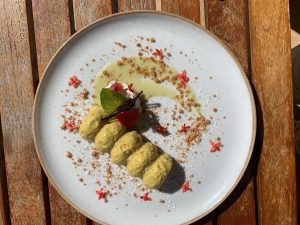 Rage Silver:Find Your Own World of Jewelry