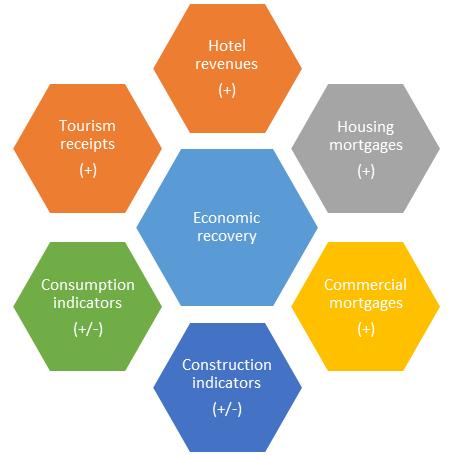 ORANJESTAD – Today the Centrale Bank van Aruba (CBA) publishes the State of the Economy for the first three quarters of 2017. This publication provides a synopsis of the local and international economic developments of this period. The highlights here of are presented below, including a summary of main economic indicators.

The Aruban economy showed initial signs of improvement in the first three quarters of 2017. Tourism-related output strengthened with substantial growth in tourism receipts, improved hotel performance, a rebound in U.S. arrivals as well as increased cruise visitors. Data for private investment and private consumption point towards a positive development, but caution is warranted with regard to its sustainability.

Furthermore, the domestic price level remained virtually flat. Investment indicators revealed an overall upswing in the first three quarters of 2017 compared to the same period of 2016. Both the number and value of construction permits expanded, while investment-
related imports picked up. On the other hand, anticipated refinery-related investments appeared not to have fully materialized.

Consumption strengthened in the first three quarters of 2017, based upon available indicators. Income from consumption-related taxes increased, possibly due to a rise in compliance and tax arrears collection. Furthermore, car loans grew, while the Consumer Confidence Index improved slightly from the second to the third quarter. Nevertheless, it stayed below the 2016 level as well as in the pessimistic territory.

Aruba’s trade deficit, as reported by the CBS, grew in the first nine months of 2017. The total value of import of goods expanded, due largely to a gain in the imports of animal-related goods, investment goods, and mineral products, while the value of exports also rose but at a lower pace. The balance of payments posted a deficit in the first three quarters of 2017, according to the preliminary commercial bank data available. This deficit was due mainly to net outgoing transfers from notified foreign accounts held by residents, as well as net outflows resulting from other capital and financial account transactions.

This deficit was partially compensated by a surplus on the current account. Although the net foreign assets declined, they stayed above the critical norms monitored by the Monetary Policy Committee (MPC) of the CBA. In summary, the economy seemed to be on a rebound for the first nine months of 2017. Nevertheless, caution remains because of considerable downside risks such as the sustainability of consumption and investment, the weak financial position of the government, the downward trend in the international reserves, and the fragile political situation in Venezuela.

The complete publication is available on the CBA’s website (www.cbaruba.org).