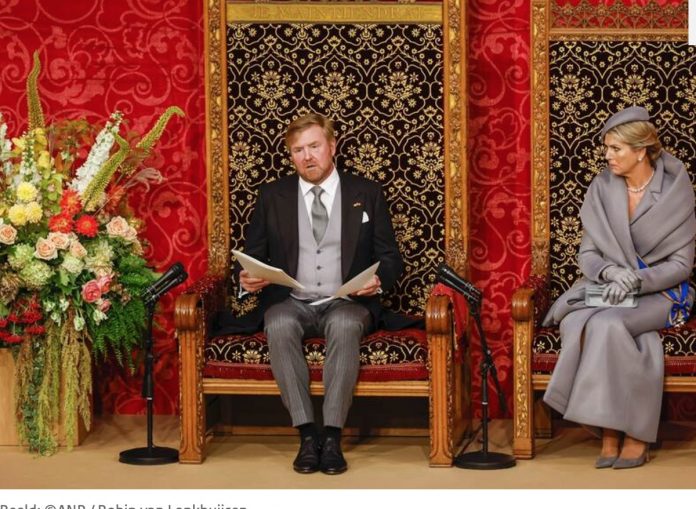 King Willem Alexander: Commemoration of 150 years of abolition of slavery is time for the Netherlands to account for its history

A better future for the entire Kingdom: that is the objective of the budget for the Kingdom of the Netherlands that includes policy directed on the Caribbean countries within the Kingdom. The document is part of the Millioenennota, the Kingdom Budget that was officially presented to the Dutch Parliament, the Staten Generaal, for its new Parliamentary Year.

His Majesty King Willem Alexander, for the first time in the presence of his daughter, Princess Amalia, opened the Dutch Parliamentary Year, known as Prinsjesdag.

In his speech, King Willem Alexander illustrated that we are living in times of contradiction and insecurity, with life security under pressure, poverty increasing despite economic growth and a decline in unemployment. There is worry about the aggressive tone in the Netherlands and because many have lost confidence in politics to solve problems.

The challenges for climate change, the necessary steps and the war in Ukraine remain great challenges. But the king urged to have a look at how all achievements have taken place, firmly, as was the case after World War II when his great-grandmother, Queen Wilhelmina told Parliament that attitude determines how to affront challenges.

“This year, the Cabinet began with an agenda for the future for 2030 that must provide future generations the ability to enjoy a safe and clean country. The perspective needs to be there for everyone, of every race and creed, in the Netherlands as in the Dutch Caribbean, in collaboration with Curaçao, Sint Maarten and Aruba.”

The effects of war and sanctions against Russia have made electricity and food a lot more expensive, which has heavy consequences for people, families and businesses, creating a lot of pressure. 18 billion Euros were made

available to temporarily compensate part of the price increase for families with medium and lower income. The support is also available for the BES islands – Bonaire, Sint Eustatius and Saba.

But to increase quality of life, investments will be done in the area of recovery and renovation of the cultural sector that suffered during the coronavirus pandemic. Culture connects people and makes it possible to discuss difficult subjects, according to the king. He mentioned racism and discrimination and the fact that attention needs to be given to the less-pretty history of the Netherlands. “On the path to commemorating 150 years since the abolition of slavery, it’s time to account for this part of our history”, King Willem Alexander said, finishing his speech with another quote by his great-grandmother Whilhelmina: “Together we must work for the benefit of the Netherlands, and in this light, the government wants to work with Members of Parliament for contemporary solutions and a good future for every resident of the Netherlands.”

The Kingdom of the Netherlands shares a past and a future, according to the Dutch Government in his policy for the Kingdom. The Netherlands wants to work on the basis of equality, reciprocity and mutual trust, for a better future and more hope for the Kingdom, after 10 years of economic stagnation and blows of hurricane, pandemic and another crisis.

The budget for the BES islands falls under management of Kingdom Affairs, and the objective is that in 2023 the islands can find their position as a dignified part of the Netherlands. Investments will be made to eliminate poverty and together with the governments of the islands, work to the benefit of all.

The Cabinet also put emphasis on the three autonomous countries in 2023. Part of the efforts of the Cabinet is to promote more cooperation with and among the countries in the long term. This way, the Dutch Cabinet is implementing motions of the Tweede Kamer (Dutch Congress), so that through mutual agreement, another term can be reach regarding the responsibilities of each autonomous country and the Kingdom as a whole.
The starting point remains that Curaçao, Sint Maarten and Aruba are autonomous countries with their own responsibilities.
In line with the Statuut, the countries can count on support and help, when they ask for it, and if it’s in the framework of agreements made. An example of current cooperation is the Country Packages (landspakket).

Sustainable public finances are a condition for economic development. Budget management of the three countries remains a challenge, with public debt increasing drastically. Covid-19 worsened the situation, where income from tourism fell greatly and was to blame for increase in deficit. Thanks to the financial support from the Netherlands it was possible to continue providing public services and financial means were available to support the citizens and commerce.

The beginning of 2022 marked a strong economic recovery that helped public finances, but there still is no complete recovery. If in 2023 there is to be a balanced budget, that depends on how the countries take advantage of economic growth and at the same time keep public spending in check. A balanced budget is important for sustainable public finances. The way in which the measures in the landspakket are effectively implemented also has an influence on public finances.

For example, the reforms in the tax department will contribute to better compliance with paying of tax; improvement of financial policy will be directed on income and expenses; and the reform of the public sector to increase effectiveness and reduce spending will increase the trust of investors and consumers.

As such, healthy public finances are a very important subject and a crucial goal of the landspakket.

Aside from specific problems which hinder a declaration of accountant for the annual accounts, there are also fundamental problems in legislation, financial organization, financial processes and administration. Concrete steps are formulated to bring financial policy back in order for the coming years, in the form of a map. In 2023 the focus will remain on taking control of the implementation of reforms and improvement on reliability of information, processes and financial laws will become visible.

The Kingdom policy for 2023 will continue depending on the supervisory work of C(A)ft, which keeps an eye on financial execution of the landspakket and also advices the Kingdom Government and the autonomous countries in order to reach a sustainable financial policy. The Netherlands counts on the work of CAft being based on the Rijkswet Aruba financieel Toezicht (Kingdom law of Financial Supervision of Aruba), Raft, in 2023. The law is currently in the Parliaments of the Netherlands and Aruba.