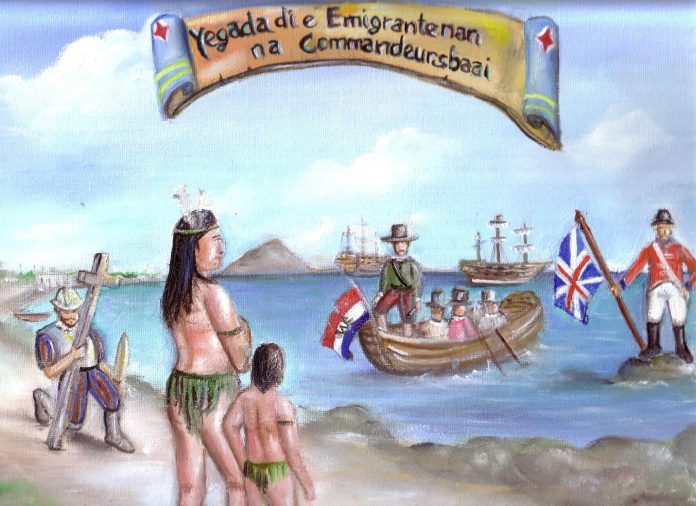 Atelier’s 89 with the support of CEDE Aruba organizes the project “Art in the Neighborhood”, a project encompassing different disciplines directed at children. This Saturday, they will be presenting the theatre play “Cacique Chakamaguay”.

Art in the Neighborhood was present in the district of San Nicolas a few days ago with the visual category and now will be at the Centro di Bario Savaneta where Ferdinand Franca, director of the play, will present together with eleven children the theatre play “Cacique Chakamaguay”.

In an interview with our reporter, Franca expressed that Art in the Neighborhood is an initiative that is present in all districts free of cost; the children don’t have to pay to receive lessons. “It is a project intended to motivate and stimulate children to enter the world of art in every discipline and to get to know art, so that they can continue down the path of dancing or theatre in the future. That is the main goal”, he said.

Franca, who is a CKV teacher (Cultural and Artistic Formation) is certified for working with primary and secondary school children as well as special needs. Currently he is giving art lessons in secondary school. He also directs different projects, for example a few months ago he directed a musical. He is someone involved in a variety of projects “in order to also revive theatre this way. As we can see, there is not a lot of theatre particularly for children.”

He is also in the process of establishing a foundation, which will be known at a later date.

Regarding the play “Cacique Chakamaguay”, which the children together with Franca produced in one month’s time, which is how long the project lasts. The play incorporates other disciplines like music and dance.

“This is a play about a history of Savaneta because it is set in Savaneta. I go a little bit into history.” He also pointed out that he received help from Aruban historian Dufi Kock regarding historical facts of how the Caquetio Indians arrive in Aruba, and how they encountered Spaniards like Alonso de Ojeda, all which is part of our history and will be presented in the play. He assures that this is not only for entertainment but also contributes to education and awareness.

He said the play has duration of 20 to 30 minutes. Acting in it are about 11 child actors between the ages of 7 and thirteen years. It covers a part of the origin of Aruba, which the natives called Ora Ubao and the Spanish called Ora Ubo – because “there was gold” but now there is no gold anymore. The play adds new content to these historical facts and the children also added improvisation. They investigated how families lived in the past, and the children together with Franca created this theatre play.

Franca says that the name “Cacique Chakamaguay” came from a person who helped them at the Centro di Bario. He told Franca that in the past, there was an Indian called Chakamaguay. This name stayed in the person’s memory, and then Franca decided to use it for the main character of the play because they found the name pretty. He will be the most important person in the story, according to Franca. He also said that back then the Indians had chiefs – cacique. “There are some names included like Bushiri, words that we use nowadays that we don’t know come from the natives, that I included to fill the contents of the play.”

The plot is about a young cacique who goes fighting to save his family. “We all know the Spaniards came here to imprison the natives, let’s put it like that. Then I made it a little prettier and not as cruel as history can be”, Franca commented.

The eleven children participating in the play were advertising for it in Savaneta and surrounding areas, asking in afterschool centers and schools in the neighborhood in there were children interested in taking part in this play in order to complete the group that will be performing this Saturday. The play is presented from 7 to 8pm and entrance is free.

Love says it all