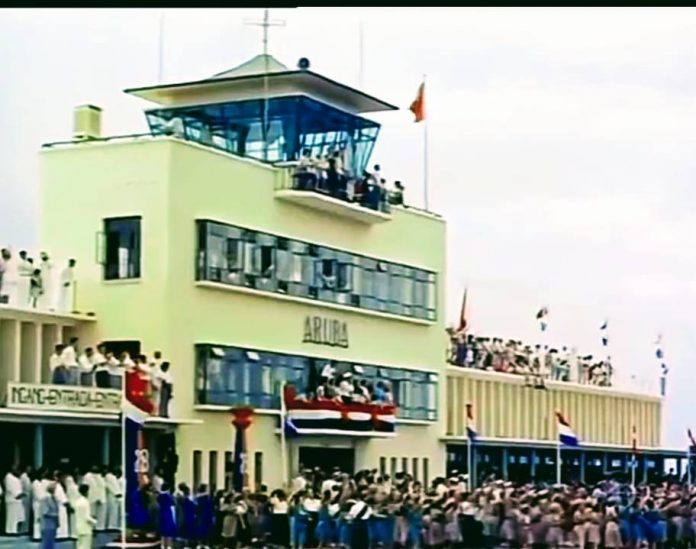 Aruba’s aviation history dates back more than 90 years; the air service network has become a critical and vital element for Aruba’s national economy.
It was on Saturday, August 18, 1923 when two US Navy Curtiss H-16 long-range maritime patrol flying boats landed for the first time in the Paardenbaai harbor of Oranjestad. The two aircraft operated out of the Coco Solo Naval Air Station (NAS) in the Panama Canal Zone. After a short stay on the island both aircraft continued their flights at 11.40 a.m. to Curacao.

On Saturday, July 4, 1925 Aruba was once again visited by a flying boat. This time it was SCADTA’s Dornier Do J Wal seaplane with Italian registration I-DOOR that descended around 09.00 hours on the sea in the Paardenbaai harbor with governor Nicolaas J.L. Brandjes and the harbormaster C. Hoek of Curacao on board. The Dornier Do J Wal returned to Curacao around 10.00 hours. Father Maria Radulphus, substitute education inspector in Aruba made the return flight to Schottegat harbor in Curacao.

In 1933, the first locally based aircraft, a Curtiss-Robin was brought to Aruba. Manuel Viana, James Hathaway, and James A. Massey flew it from a mud-flat runway near the sea at Savaneta. None of these men had any real experience in the air. To overcome this handicap, the trio engaged an ex-Braniff Airways’ pilot A.J. Viccellio. His task was to assist in building up aviation in Aruba by means of instruction and the possible development of an airline. The group next bought a Bird CK Bi-plane powered with a 100 horsepower Kinner K5 radial engine. It had room for three passengers and the pilot. However, the aircraft was ruined by rust and wandering goats. The group was later enlarged through Mr. Viccellio instruction to William I. Ewart, E.V. Miller and G.T. Borsch. They contracted to buy a plane in Texas. The plane left Texas, but never completed the trip to Aruba; it was forced down in Tapachula, Mexico. Mr. Viccellio went to Mexico to see if he could regain the plane but returned empty handed. However, he did arrange the return of the ferry pilot and his wife to the States.

In 1934, commercial aviation was introduced in Aruba by Manuel Viana of Viana Auto Supply. Once each week his six-passenger single-engine Loening C2H Air Yacht amphibious airliner carried passengers and mail between Aruba and Curacao with pilot A.J. Viccellio at the controls. Manuel Viana bought the Loening C2H Air Yacht from the Standard Oil Co of Venezuela. In December 1933 the aircraft was shipped to Aruba and handed over to Lago and sent to Mr. Viana of the Caribbean Flying Service. In 1934 the aircraft was registered to the Caribbean Flying Service with registration number PJ-ZAA and used for scheduled service between Aruba and Curacao. Operations ceased December 1934 after the start of operations of KLM West-Indisch Bedrijf. Manuel Viana was paid by KLM to stop the scheduled service.

KLM’s “Snip” made its first appearance in Aruba on December 24, 1934, when the Fokker F.XVIII touched down at 10.20 a.m. on the mudflat runway in Savaneta. KLM later transferred its operations to its own graded runway, the KLM Field, located at the site later known as the Dakota Field.

KLM’s Snip, the PJ-AIS a Fokker tri-motor, ushered in the scheduled flying age in Aruba on January 19, 1935. Together with the KLM’s “Oriol”, the PJ-AIO, also a three-engine Fokker, they flew until 1946, after which they were scrapped. KLM transported with its bi-weekly Aruba-Curacao operations 2,695 passengers on 471 flights.

In early 1942, the German Navy began anti-shipping operations using U-Boats in the Caribbean. The subs sank several tankers in the harbor at San Nicolas, and shelled the Lago oil refinery in an attempt to disrupt the supply of fuel to the war effort in Europe; prompting the Government of Aruba to build a 5,100 foot long air strip for the US Army Air Corps together with a small building that served as a terminal, which was inaugurated on June 4, 1942. These facilities later became known as the “Dakota Airport”. During the period the airport served as the base of operations for the U.S. Sixth Air Force defending Caribbean shipping and the Panama Canal against German submarines, until it was disestablished after the end of the war in October 1945.

The third terminal building was inaugurated on March 18th, 1950. On October 22, 1955 the “Dakota Airport” was dedicated to Princess Beatrix of the Netherlands during the visit of HRH Queen Juliana. The opening ceremony was presided over by H.R.H. Prince Bernard. Furthermore, during this same year the old Dakota terminal building was changed into the airport fire department garage.

Nearly a decade after the Government of Aruba constructed the original paved runway, it was discovered while repairing 42 paving breaks which appeared between December 1950 and March 1951 that only two and a half inches of paving covered the runway. The paving break-ups threatened to close the field so the island government decided to adopt a two-fold program; to pave an area 133 feet wide and 4,500 feet long to be used as a runway and taxi-way strip while the main runway was being repaired. In September 1953, the 4,500 foot combination runway and taxiway was completed, which served as a substitute for the main runway while it was being repaired and lengthened. When work on the main runway was completed in 1954, the new 6,445 ft. lighted runway and 4,500 ft. parallel taxiway configuration served to upgrade the airport from Class D to Class C in the International Civil Aviation Organization’s (ICAO) rating system which existed at the time.

In 1962, plans started on the expansion of the airport to accommodate the new jet aircraft entering into service, and to plan for the passengers expected from new and larger airplanes. The plans included a new terminal on the north side of the airport; a complete new runway laid over the existing one including a 3,000 ft. extension into the lagoon, relocation of the Oranjestad – San Nicolas highway around the airport, and new glide-path lighting needed for jet aircraft approaches.

On April 10, 1964, the first phase, the extension of the runway was completed and the start of the jet age commenced in Aruba. The first two jet landings in Aruba were Jet Clipper “Aruba” of the Pan American Airways and the Henry Dunant of KLM. A year later in 1965 the ground breaking for the construction of the fourth terminal building took place, which was inaugurated on November 8th, 1972.

In 1997 the last major expansion project for the airport, Beatrix 2000, began. The first phase of the project was completed and inaugurated on September 1, 1999. The Beatrix 2000 design included an expansion and renovation to the existing 1972 terminal; and included a new arrival immigration hall, baggage claim, 8 contact gates, a new concession area, and two separated check-in buildings for U.S. and non- U.S. bound flights. Source: airportaruba.com.