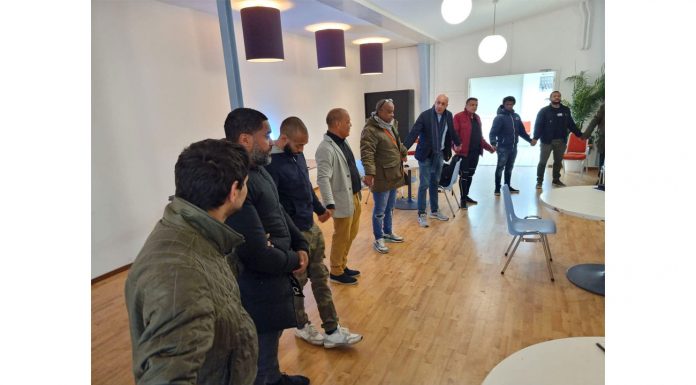 Eliezer Foundation is focused on helping homeless addicts. Yesterday, January 5, in a press conference with various media, the founder of Eliezer Foundation, Gino Frans celebrated 26 years of sobriety. He told a bit about his story and how he came to celebrate this milestone.

“Every year on the 5th of January I celebrate the great day in which I found deliverance. God freed me from drugs, alcohol, the streets, many other things that do not please God. But today I stand firm and I can say today I mark 26 years free from drugs”, Frans said.

Frans said that recently he sees a lot of young kids on the streets and they don’t know what they’re doing. He said that they are practically using drugs to belong in a group, and they used drugs without knowing what will happen to them. “You think you are strong, but it destroys you. I was one of those who thought everything is okay, I am strong, I am a big guy, I thought I was all that; but little by little it sank me completely until I was dragging myself on the streets”, he said.

After rehabilitating and overcoming his addiction, Frans founded a foundation to dedicate to helping other addicts on the streets. He explained that helping people he also helps himself, because he sees himself in every person that he helps.

“Drugs are like cancer, the symptoms are the same. The addict begins slowly until he sinks, because you don’t go up, you go down. Each person I help I am helping myself also because it fills me with joy, because I don’t want them to be on that path. My work helps them to stand firm, like I can, and if God helped me He can help others too. This is our goal,” Frans pointed out.

Together with Frans was Mr. Anthony Arends, a person with whom Eliezer Foundation battled for a long time to rid him of addiction, and in the end he managed to overcome. Frans emphasized that he tells his story not to boast, but to show that the work they do bears fruits and through them – who are addicts – they can have a bigger influence on other addicts on the streets.

“When you are an addict, you rehabilitate and you are an ex-addict, you have a lot of influence on those on the streets. We need each other, and all those who studied for this – with all respect, we need them, but they also need us. We are people who were rescued from the streets,” he added.

Arends said that he began walking the path of addiction with at barely 17 years old. He began with cigarettes and after that he tried stronger things, like alcohol and cocaine.

He explained that he tried to overcome addiction many times, and one of the important points to achieve rehabilitation, according to Arends, is to search for God. “Without God you will not achieve it, and this is 100% because I got the opportunity thanks to God.”

He said that right now he also took the decision seriously and decided he had enough. “I think you get older, you see what happens on the streets, and this plays a big role,” he added.

Currently Arends has been completely sober and clean for almost a year, and he thanks God for this achievement. “Thanks to God I am reaching a year and I feel sublime. I wake up in the morning with a will, a desire, a want to fight. Contrary to when I was in that world, it is completely different. You don’t know the time of day, you don’t know anything.”

Finalizing, Arends said that he rehabilitated and is helping at the Eliezer Foundation because he wants to be an example for others. “The way Gino is an example, I want to be an example too. I want to continue helping people so that they don’t go through what I went through.”