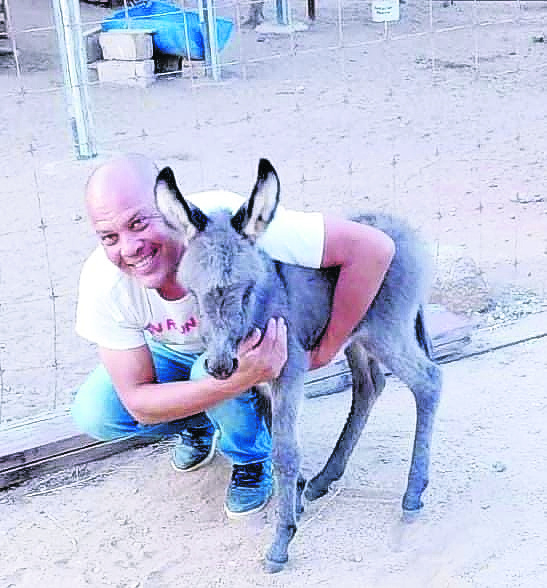 Felipe has a hard job. But in the same breath, Felipe is much loved and has every freedom, with his food arriving on time and all the attention he needs. Felipe is one of the recue donkeys at Eliezer Foundation and he helps rescue people going through difficult challenges in life. But aside from everything else, Felipe is an animal, and that on itself is very special for Gino Frans (54), founder and director of the foundation.

Even though Eliezer Foundation (Zorgboerderij La Posada) has the goal of helping people struggling with addiction, it is the realization of Gino’s dream, who for as long as he can remember, he always liked animals. “There are times I like animals more than people.”

Felipe is not alone. He is in the farm together with Bella, Skippy and Linda. Most of them came to the farm abused, badly cared for. “Felipe is three years old. I don’t know if he’s going to grown anymore. I think this has to do with inbreeding in Aruba. I found the mother to take care of, and she gave birth here. Linda was also born here.” But for one reason or another, this little donkey is like a king, moving how and where he wants.

Gino used to collect animals as a kid. It wasn’t strange for him to be scolded because, there, Gino brings a duck home. The family lived in the Netherlands for a while and nothing changed. Even though Gino Frans did not become a veterinarian or studied in the area of animal husbandry, he educated himself thanks to the internet in order to take care of them in the best way possible. And now he applies that knowledge, combined with his experience to give animals that are abused, like horses, donkeys and dogs, so that they can find shelter.

What made it possible for Gino to establish a shelter was a philanthropist who allowed them to use a big plot of land. However, this gentleman passed away and Frans had to find another plot of land. Soon he is moving to Santa Lucia, which allows Gino to let the animals roam free. “Here we are close to a main road. Felipe wanders around and sometimes he goes outside. A car could hit him”, he said.

The child who loved and collected animals, today continues with animal care, but also care of people. Eliezer takes care of people suffering from addiction, and the animals and plants in the farm help with the work. “We are a recovery farm. We plant and care for animals. What we try to do is let the clients appreciate the care of animals and learn agriculture.”
Every client, every addict who arrives at Eliezer gets an animal to take care of, which means that the person learns to work, gets discipline and learns to love animals.

Gino tells each person the story of the animal that they received in their care, so that they can appreciate them. For example, the horses at the farm are not for tours, they are for the people who need guidance to learn what the animals need. From food, baths, cleaning – which includes cleaning the stables. It’s a daily work with its routine, necessary for the animals to survive. And when a person who never received love at home realizes how much the animal depends on them, how the animal responds to their care, the personal transformation is enormous.

Currently, there are five horses that one volunteer, Mrs. Wever rescued, and the clients of Eliezer take care of them. “The horses were abused, so they cannot do long tours like before. What they do is give lessons to children. The money generated from this activity goes back into the care of the animals.”

An animal gives a lot of love. “You can benefit from an animal. If you teach a child to take care of an animal, he learns to love. In this program, we see change in people that for example did not care for their own child. But here they need to give constant attention to the animal under their care for it to survive. And animals are grateful. They respond.”

A horse becomes happy when it receives attention, and the emotion that the clients experience can help them later with their own people. “There was one client who complained why we must go and cut grass every day. He complained why he needs to do this work if he’s in Eliezer for his addiction and not to cut grass.” The conversation that Gino had with this person was about the client’s children, of whom they did not take care. The children are now on the street, on their own. “I told him it’s the same with the animals. If you don’t give love and food, one day they will break out and leave. Sometimes it’s hard to explain something so emotional to a person, but it becomes more understandable and acceptable if they live it themselves.”

What makes Gino very happy is seeing how the therapy with animals works. Something that stood out the most was the story of an adult with autism, who because of lack of understanding found himself on the streets using drugs. Eliezer Foundation opened their doors to this person, and Gino assigned a horse to their care. After a few months caring for the horse, suddenly the client began speaking. This surprised the family, but not Gino. “A horse, an animal has a way of communicating that people don’t have”, Gino said very happily. And he knows what he is talking about, because Gino himself was once an addict, almost thirty years ago. But for many years already, his wife and his animals like Felipe give him the necessary energy to work with those whom society has rejected.

Costa Linda is back!