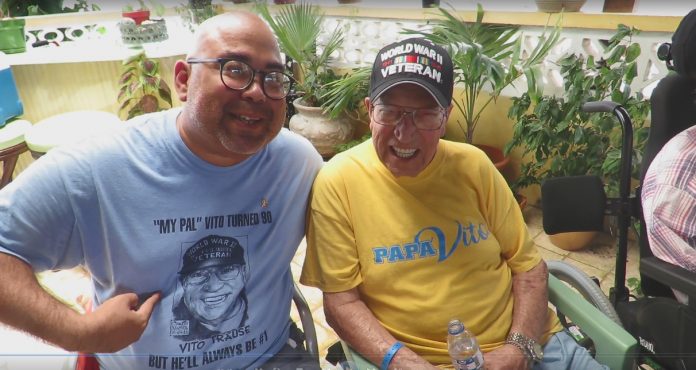 A few months ago, Aruba Today met two men with a remarkable story about their friendship. Friendship has everything to do with love, respect and joy and all of that is applicable to the duo Jeff Angela and Vito Traus a.k.a. Papa Vito. Aruba Today released this article about the two. With sadness we received the news this past week of the passing away of Papa Vito, so we have decided re-publish their story again as an honoring to Papa Vito. We wish the family all the strength in this hard times.

They met years ago when Vito visited Aruba and Jeff showed him and his family around the island. “We are pals for life. This gentleman deserves all the respect there is as he is a good man and veteran who fought for our liberty and freedom as we have it today”, says Jeff. Vito smiles throughout the full interview and repeatedly expresses his love for this island and its people.

“One day my daughters came to Aruba and they took me with them. That is where we met Jeff as we booked a tourist tour with him and since that moment we are pals. He took us all over the island and we fell in love with Aruba. We tell people back home how good it is here and they try to book the trip but many times it is fully booked and they can’t go. We have to reserve one year in advance sometimes. That is how good this town is.” Vito praises the food, the service and the people. “You treat us good, you respect us and that makes us come back every year. If I can’t come back anymore in the future for sure my daughters will,” says the 93-old World War II veteran.

Special Men.
Jeff is Aruban-born and proud of his island. “I showed papa Vito and his family the real deal of Aruba, the history, the food, everything. I take him to visit special places and characters. Last year we visited the marines and that was a fantastic experience. Now we are here in the house of Padu Lampe.” Padu Lampe or Padú del Caribe is 99 years old now and he wrote “Aruba Dushi Tera,” a waltz that is now the national anthem of Aruba. He is a musician and songwriter who has been recording and composing for several decades, and he is also called the “father of our culture.” Lampe was honored by the Kingdom of the Netherlands with a Silver carnation. Likewise, Vito has been honored in the last seven decades as a veteran by presidents, governors, mayors, the New York Knicks … you name it. “Last year he graduated from high school because before he never got the chance to do so due to his dedication to the army,” says Jeff.

Into Service.
Vito: “I come from New Jersey and was born in 1925. In 1943, I stepped into service at the age of 18 and I quit school. Our basic training happened at Alabama in the infantry, after that a ship took us to Europe, but stopped on the route for a two weeks training in Africa while continuing after that to Italy. I started as a replacement in the front line, and I was also a scout. We needed to find out where the enemies were and inform our captains accordingly. It went wrong and they shot a lot of ours and captured the rest.” He experienced being war prisoner in Munich where the Nazis treated them bad and restrained them from food. I weighed 165 pounds and came out of prison with weighing 130 pounds. We were eventually liberated and we came back to USA where everyone was so happy. The last guy of my army group died last year.”

During the visit at Padu’s house, Vito shared his story while his daughters heard the history of our Padu. “This is all about sharing and respect towards men that carry a history of achievements. And it is about the mutual love for Aruba,” as Jeff proudly stated.q