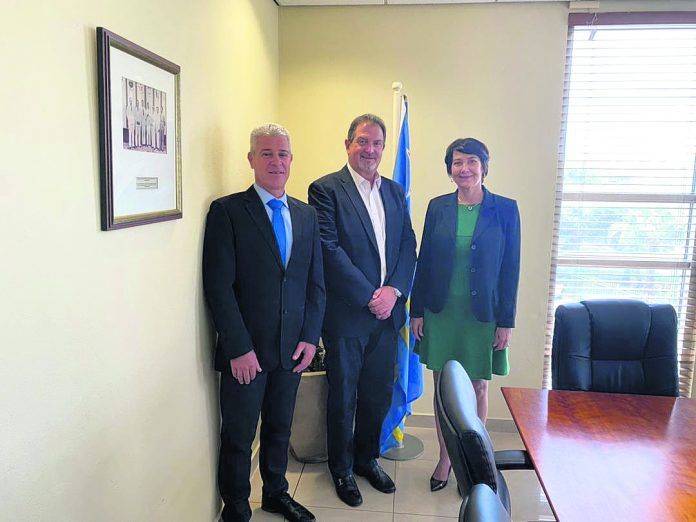 Since 2019, the border between Aruba and Venezuela has been closed, both for direct flights and direct maritime transport. This has had an impact on different sectors, mainly on commerce. During an interview with our reporter, Mr. Adan Celis, first vice-president of Fedecamaras Venezuela, explained the importance, and plans of sensitization to end the border closing between the two countries.

Celis, who is on a visit to Aruba and had plans to meet with the minister of Labor, Energy and Integration, Glenbert Croes, explained during his interview that the topic of sensitization has a very important role in order to reach the objective of reopening the border. “Sensitize public opinion and sensitize the officials from the Venezuelan government as well as the governments of the ABC islands, in order to lift the restrictions between these sister nations”, Celis said.

He said that beyond the differences that might exist between governments, the people need to be united, there must be no one taking away liberty and suppressing the people, and he assures that there are ways to keep everything under control without the need to close the border.

About three years since the closing of the border, the negotiation processes to achieve the objective of reopening the border proved to be complicated processes requiring a lot of diplomacy between both countries, as well as concrete agreements regarding a lot of necessary control measures. But Celis says that they remain optimistic that soon the border can be reopened for commerce.

“I believe in the process we are in, and if we continue doing this, the businessmen and many other people involved in the subject will continue with a lot of optimism, the reality that we can reopen the borders for commerce but also for the exchange of people”, Celis added.

Without a doubt the relationship between the two nations, Aruba and Venezuela, is one with a lot of history, and during our interview, Celis highlighted the ‘historical brotherhood’ between the peoples. He pointed out that there are possibilities for all type of commerce, tourism, and the opportunities for healthcare. Despite the humanitarian crisis in Venezuela, Celis emphasizes that there is still a very good health system in the country, particularly the private health system, which he indicated still counts with very good doctors.

The situation regarding the closing of the border between Aruba and Venezuela started when Venezuela’s president, Nicolas Maduro decided to close the border for a period of 72 hours, starting on the 5th of January 2018. This measure was directed to Curaçao and Bonaire, and back then, Maduro said that this decision was to “put pressure for a healthy exchange”.

In 2019, prime minister of Aruba, Evelyn Wever-Croes noted that the vice-president of Venezuela gave declarations that they had decided to reopen the border, but on the 10th of May, Wever-Croes signed a decree to close the border. This was motivated by the political, economic and social situation that the neighboring country was going through, during which Aruba registered and increase in the amount of immigrants, which represented a public order and national security problem for Aruba.

Last month, news circulated on some media and social media indicating that the border between Venezuela and Aruba would reopen and direct flights between the countries would resume. This news caused a commotion, but Wever-Croes denied its veracity. “We are keeping [the border] closed, pending on Venezuelan authorities. We are working on it], she said.

To squelch the rumors, the government of Aruba sent an official press release to inform the people of Aruba that the border would not reopen: “We inform that the government of Aruba is still in negotiations with Venezuelan authorities. The prime minister asks every citizen of our country, particularly Venezuelan citizens who have made our country their home, to remain calm and not believe news that are not from the government. Aruba;s government continues with the efforts for a responsible and controlled reopening of the border, but for this, more cooperation from Venezuelan authorities is needed.”

It is still not known if or when the border between Aruba and Venezuela will reopen, but as Mr. Celis indicated, the reopening of the border presents big opportunities for commercial exchange that will greatly benefit both countries.

Poems about the Journey of Love