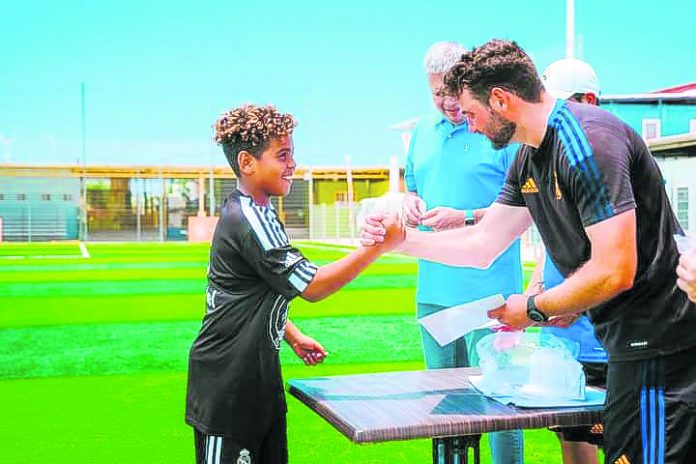 Soccer is one of the most popular sports around the world and also in Aruba. A lot of young people share the dream of playing professionally for big teams. Recently in Aruba a soccer clinic was held by Real Madrid Foundation, during which a group of young sportspeople got the opportunity to receive different techniques according the philosophy of discipline and the play style of the soccer team Real Madrid.

One of the participants at the clinic, Fabio Alexander Montilla, an 11-year-old soccer player with the dream of becoming a professional player, told our reporter about his experience during the clinic, what he learned and what his dream is.

When he was only two years old, he received his first soccer ball, and by the time he was three he was already part of a soccer team in Aruba.

He said that his experience during the clinic of the Real Madrid Foundation was very good and he learned a lot of new things. “It went really well, I had a lot of fun and I think if possible I would like to go again next year”, he said. “I knew a couple of things, but I learned more which makes things easier, and I feel like we played just like the first team of Real Madrid.”

Alexander said also that his favorite aspect of the clinic was that the coaches were very kind. He said he had a great time and he learned new techniques which will help him improve his skills to play soccer.

Alexander plays with a well-known local team, and his position is defense although he can also play midfield, defensive midfield. He doesn’t hesitate to defend his team’s goal until the end.

Claudia Meriño, Alexander’s mother, explained to our reporter that Alexander received an invitation this year to take part in the clinic, because last year he also participated but they had to pay for his spot. “This year, a man contacted me asking if I was interested in a free spot for the clinic of the Real Madrid Foundation this year. I said yes, that my son was very interested.”

During the clinic there were different categories, each with around 12 children participating. By the end of the clinic, of all the children who participated, one who stood out was selected to travel to Madrid for free and to take part in a championship in Madrid. Aside from that, another ten kids will also receive an invitation to go to Madrid.

“We are waiting for the end of the month to see if he gets an invitation. On the last day of training they do the closing of the clinic, they hand out the prizes, certificates, the balls. They select one child in each category who is going to Madrid for free, and for those who get an invitation, they send an e-mail after one or two weeks. They send the list of invitees, which is around ten children”, Meriño explained.

For his part, Alexander says that he is waiting anxiously and hopes that he can be one of the invitees to go play soccer in Madrid, another dream which could come true. “If they invite me to go to Spain, I will go”, he said.

The Hill family honored by the Aruba Tourism Authority.