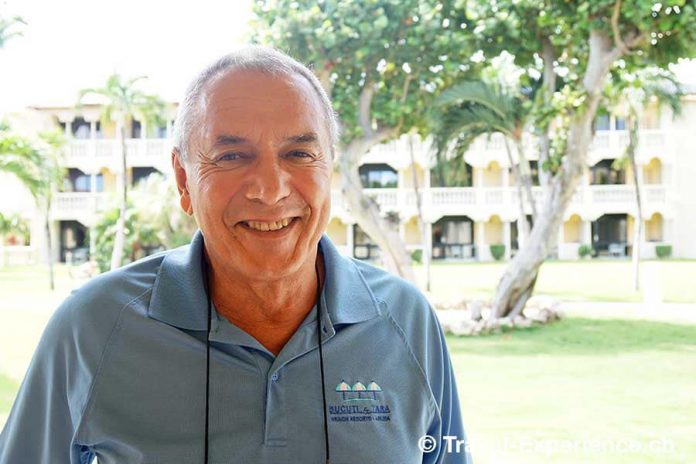 The Green Lantern is the name of a superhero appearing in American comic books and television series. Going green is defined as making more environmentally-friendly decisions such as to “reduce, reuse and recycle.” If we could name one superhero in the field of sustainability, it would be Ewald Biemans, owner of Bucuti & Tara Beach Resort. “We are carbon neutral. All you leave with us is your footprint on the beach,” he states.

The love of nature has driven him throughout his whole life to think differently. “I was chairman of the environmental commission of the hotel association about 30 years ago, and I brought in people that knew about sustainability – solar panel professionals, water recycling experts, people that teach how to reduce electricity with the goal for everybody to join. Some hotels did, some not. I for sure wanted to have a green resort,” Biemans explains. “You need to invest to save in the long run. Omitting CO2 is what you save too. I reuse and recycle. I am not using oil to produce electricity, but solar panels for already 30 years.”

50 Years Clear Focus
Biemans was co-owner at Manchebo Resort 50-years-ago and planted all the palm trees you see in this area. “There was a lagoon here where is now the parking. I built the now Bucuti as a wing for Manchebo in the late 80-ies. In 1991 I split off and went on my own with Bucuti.” In the Mid-nineties Aruba brought in a lot of foreign workers_ about 30.000 people. From a little quiet and peaceful fishing village without traffic lights it all of a sudden became busier. More housing, more hotels, more people on the beaches which got filthier, garbage in the streets and in the cunucu … we saw the degradation. “So we started to clean up because I was worried it would become a destination that people don’t want to come to anymore which often had happened within the region. We organize the beach clean-ups for 24 years already.Guests participate in it and they love it.”

Biemans talks about the oil crises in the nineties and the year 2000. “Every time your electricity and water bills go up but we already started measures in front not to have to increase our rates like a lot of the hotels were obliged to. We implemented motion sensors for lights, we placed water reducers in the showers and toilet bowls, everything to save as much as we can. It is just a way of thinking logically about things.”They started to separate shower water from toilet water and began to use the shower water for the plants. “In 1996, I already installed a full irrigation system here.” Bucuti was already recycling paper, carton, glass, aluminum and oils for years so when the government decided to close the garbage dump, Bucuti was not that affected. They made a deal years before with Ecotech, the waste management service company, to put the separated garbage in bales and pick it up for free. “We for years already reduced our garbage disposal with 60 % by separating it. I don’t have one time plastic in the hotel, with the only exception of garbage bags. We use plastic reusable cups, no laundry bags in the rooms, we give thermos bottles to each customer. We tell people not to buy plastic and we have stations to fill up water.”

Most Sustainable Resort in the World
Bucuti holds the most eco-certifications in the Caribbean. The resort has achieved 17 consecutive years of Green Globe Certification and in 2016, Green Globe declared Bucuti as the “Most Sustainable Hotel & Resort in the World,” naming it to the new elite level of Green Globe Platinum. The resort also holds the distinction of being the first hotel in the Americas to earn the highly coveted ISO 14001 environmental certification every year since 2003. Bucuti is Travelife Gold certified and in 2015 earned the Caribbean’s only LEED Silver certification for lodging, a remarkable achievement for retrofitting a property, which is more difficult than incorporating LEED standards in new construction. The resort is also a TripAdvisor Green Leaders Platinum Level member. Biemans, a sought-after guest speaker on eco-tourism, has been honored on numerous occasions both locally and internationally for his environmental preservation work. Biemans is obviously proud of the achievements and strengthens it with some facts. “Let’s say you are a typical American couple living in upstate New York and you commute every day to work. Now you have a choice to take a car and drive to the keys of Florida or you can fly down to Aruba with American Airlines’ modern jet, most times for 90 % occupied. You spend a week with us and your omission is 60 % less than taking that car driving to Florida and sleeping in hotels along the way.” He continues saying that the plane is more efficient than driving as a fact. “It’s the taking off and landing that cost energy but you divide it over many people. We talk Environmental Protection Agency (EPA) numbers of emissions per mile flown here. A typical household in the USA is with air-conditioning or heating 24/7, driving at least one hour a day, using almost everything disposable and wasting energy like there is no tomorrow. We capitalize on that and carbon neutral is the result. We consume and omit as much as we produce.”

Farmer at Heart
The sustainability part comes back from Biemans’ ancestry and youth. “I am a farmer at heart, I grew up the first seven years of my life on a farm in Austria. I love nature, I love animals and of course my profession which is hotel business and service. Actually it is the same service as a farmer. Your cattle; pigs, chickens, dogs they need to be taken care off and they will return the love. You treat them right you get more results. The same goes for the plants, there are people who communicate with plants. I love plants and grow them.”

He went into the hotel business because he loves people, giving service and the ambiance of the resort business. It’s all about celebration, fun, anniversaries, birthdays and honeymoons, he says. “I could never work in the service industry like a hospital or police force. That to me is too tragic.” Biemans went to the hotel school in Austria and partly in Venezuela followed by university which he attended in Tallahassee, Florida. “It has a very good international business department.” He worked for Hilton and Intercontinental and came to vacation in Aruba. They offered me a job here in the hotel business and I accepted it, here I am 50 years later,” Biemans laughs.

Go Out & Preach
His mission is to create more awareness on his beloved island and in the world about sustainability. “People don’t realize that one of the main motivations is global warning, you need to start worrying. Sea levels rose for the last 20 years but nobody seems to care meaning that the beach will be gone here in the next 30-40 years.” He gives workshops all the time, but locally there is simply not much interest in this area. “I was much more active 20 years ago than I am today. I am still doing a lot though, I go out and preach. But you can’t impose anything, you must keep on repeating. Luckily you read about it more and more every day and it will come here eventually. I will never give up.”q