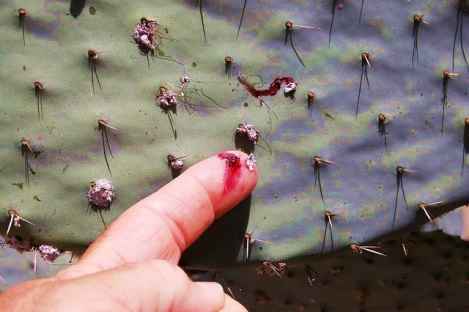 ORANJESTAD — Worlds ancestral pigment farmers of the Americas cultivated a vegetarian insect that offers a high quality dye for animal, vegetal or synthetic fibers, fabrics and food preparation. This pigment was used in watercolor and oil paints and marketed a commodity. Carmine is a natural, animal coloring applied in the manufacturing of pharmaceutics and cosmetics such as rouge and lipsticks.

The insect that produces this amazing pigment is known as cochineal tick (Coccus-cacti) and they thrive on cactus plants, especially prickly pears or tuna`s (Opuntia spp.).The insect when full grown, gives off a reddish or carmine dye when crushed. For this purposes it is set out on the Nopal cactus, Tuna Spañó and other Opuntia species (Nopalea Cochenille or Dactyolopius). The tiny tick thrives by extracting juice of the cactus to mature. Then it is harvested and slightly sundried. One pound (1 lbs.) of color holds about 70.000 ticks. From this, crushed or leached in alcohol, a dye is obtained called Cochineal Red.

By the year 1837 the island`s Governor motivated entrepreneurship by assigning special areas of cultivation, such was Socotoro, Companashi, Mon Plaisir, Sividivi, Canashito, Quivarco. In Savanata and Sabana Grandi, Sta. Cruz. In Noord close to Shaba, Cunucu Abao, Pos Abao, Tanki Flip, Tanki Leendert and Ponton. Remarkable was the implementation of a few other local plants in order to improve production. These where the leaves of the Catash or Loki Loki tree (Phyllanthus botryanthus) that were rolled up into a cone shape which locals used to call “cartuchi ” or “peperesh “. The cocoon served as a parasol, umbrella and a wind shade at the same time protecting the tiny animal against the harsh elements. This was pinned in the cactus by using a thorn of a Cadushi ( Lemaireocereus griseus).

At Sabana Grandi there used to be some six tomb ruins of a Dutch family with the name of Strakbein, who farmed the Cochineal bug in this area. It was an exhausting work. Soon after the aloe, another introduced plant, the cultivation of the bug began taking over in these experimental plantations. When in 1857 the Aniline dye was commercialized in Germany, the Cochineal commercial value plunged and by the year 1867 local cultivation disappeared completely.

It’s important to know that carmine -farming seems to pre date the Inca’s and Aztecs- also called cochineal (for the insect from which it is extracted), cochineal extract, crimson lake or carmine lake, natural red 4, C.I. 75470, or E120, is a pigment of a bright-red color obtained from the aluminum complex derived from carmine acid.

Carmine from Cochineal continues to be widely used in the industrial world because it is such a stable, safe and long-lasting additive whose color is little affected by heat or light. This carmine is also used to create the red Skittles candy however since 2009; Skittles have been produced without animal gelatin or shellac.

Episode XLVI (46): The hummingbird – our “Blenchi”

The Cassava: The Cassava should be considered a world heritage food....