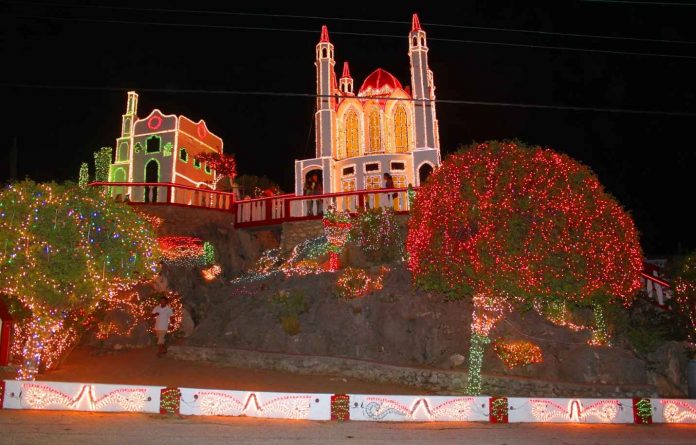 Every year December dresses Aruba in lights that shine everywhere and best expressed by the well-known Sero Preto or Black Hill, light decorated houses in San Nicolas. However Pasco or Christmas was not always celebrated this way on the island. Long before the introduction of electricity, there were customs and traditions that made the people of Aruba looking forward to “Pasco di Nacemento”.

Weeks before Christmas, Arubans began cleaning and painting their houses. An ancient custom was also to tie three aloe leaves with a bright red ribbon and hang this charm on doors, doorways and windows to welcome the good spirits of peace and harmony into each home. Typical dishes were enjoyed as a family: Christmas ham, ayaca, goat stew, stuffed turkey and oliebollen (a Dutch tradition). They drank chuculati di pinda, which is hot milk sugar and mixed with grinded peanuts. The woman drank cream punch and the men had their rum or a native alcoholic beverage made out of agave called Cucuy. A liquor distilled from the fermented juices of the head, body or leaves of Agave cocui (“green agave”), which used to be artisan and produced locally. Nowadays it is still being produced in the Venezuelan regions of Falcón and Lara. With a taste similar to other agave-based liquors such as tequila and mezcal, it is known as the Tequila of the Caquetios in Venezuela.

Families went to the Aurora Mass to demonstrate their Christian faith. It is called ‘Aurora’ because it is celebrated at the dawn of the new day. The cradle of Aruba’s Christianity is found at the north coast of the island. This little chapel, named Alto Vista, has a lot of history that attracts many tourists year around and for the Aruban population it’s a place for veneration where they find peace and tranquility for their restless spirit. There are many stories related to the small chapel and the great Christian faith of the native Amerindians, such as one from 1760 mentioned in the books of the Alto Vista Chapel referred to Antonio Gregorio, an elderly neighbor of the place, very devout but at that time seriously ill, who before upon dying wanted to receive the holy sacrament given by catholic priest.

Antonio’s wish seemed very difficult to fulfill since at that time there was no priest in Alto Vista. Neighbors, friends and relatives of Antonio gathered to pray in the chapel. Now after eight days of prayer, to everyone’s surprise arrived an old Alto Vista neighbor who was returning from the mainland, Venezuela and was coming in the company of a priest, Father Maximiliano, which came to see the sick man and to give him the sacred oils on Christmas Eve before the elderly man passed away.

Meanwhile, the Prosecutor’s Office raised two flags on the flagstone on top of the hill to announce to the inhabitants of Alto Vista that something extraordinary was happening and people began to arrive from all sides for the occasion.

The priest greeted everyone with great cordiality, speaking of the importance of confession to receive the Holy Eucharist (Communion). At midnight, Father Maximiliano gave his first mass “Misa di Aurora”.