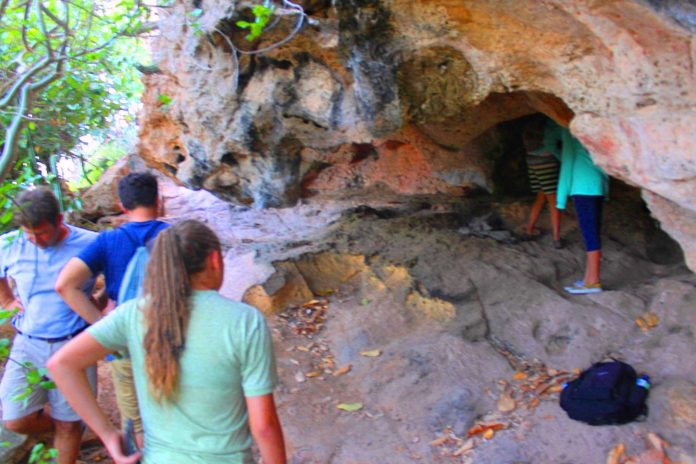 Paleo Amerindian societies moved by land and sea (along the coasts). Their material legacy, which includes works in stone, bone, ivory and wood, is indicative of groups with a family, clan or tribal organization, who live by hunting, fishing and gathering, but are also engaged in artistic and cultural expressions and spiritual activities.

The cultural diversity and similarities of these groups can determine a lot regarding their origin and path used to reach Aruba. These characteristics reflected in the way that they buried their deaths. Their distinctive shovel teeth incisors, the peculiar shape of their bones, skulls and jaws, and their tool making abilities left behind as testimony of the part that have played in our history.

Various archaic sites are present on our island. Some are stone quarries, shell maidens and gathering locations while others where single graves, family or clan cemeteries and other natural sites that offer great shelter. From burial sites we can obtain great information regarding these early peoples and specially though their bones. One of these single graves site was discovered at Piedra di Wara wara, in 1976. Sabania Abao, Sta. Cruz. A single male having shovel incisors, Approx. 37 at age of death, laying North beneath a diorite bolder in a crouch or fetal position on his right side, cranium resting in right hand, microscopic red ocher pigment present on skull.

The only way I suppose these people could have arrived was by sea, however if the sea level was lower in those days, they could have walked and jumped a steam or two. Canashito was one of these sites that these paleo natives liked a lot. One for its safety features, shelter offering caves and fresh water that could be collected for daily use.

At Malmok cemetery, combinations of 2 graves at cross angles have been attested several times: they always contained a male and a female skeleton. Unfortunately, only the sex of one grave at Canashito is known to be a male and one of the skeletons seems to be a short person.

Three of the Canashito dead had their head resting on hand, in a similar fashion as most of the paleo deads at the cemetery at Malmok and the grave at Piedra di Warawara. The burial cluster in Canashito is especially interesting when compared to the cluster of Malmok.

The Malmok site is situated at a distance of 200 m South and 300 m north from the sea, parallel to a former saliña or salt -lake. The site shares its sandy subsoil with the salt-lake. Limestone is found below the sand in the site. This limestone is part of the Lower Terrace Formation. It was formed during a period of a rising sea level. The limestone emerged by the subsequent lowering of the sea level and tectonic uprising. Most of the area of the Malmok site is flat terrain near the saliña.