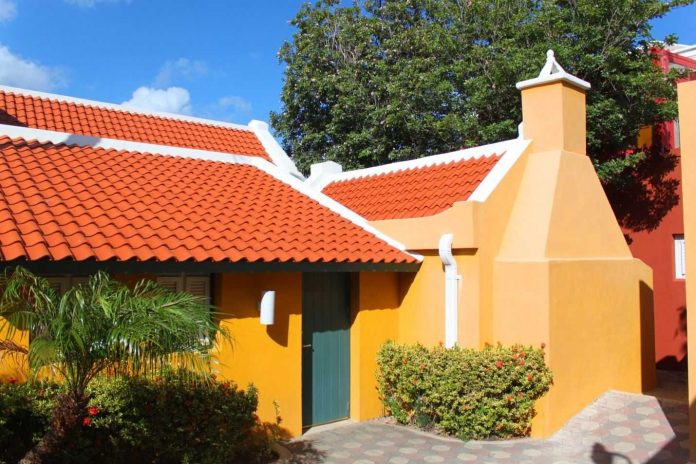 The first buildings in Oranjestad were erected in 1797 however it became a little town in less than thirty years. Its houses were anything but large, and all of them one-floor, except maybe the commander’s house.

As soon as tiles has been introduced, several roofs being entirely covered with them. Others were made of shingles and the dwellings of the less well to-do had roofs constructed of maize-stalks or palms –leaves or the traditional mud mixture known as torto. Cottages of this kind mostly consisted of pre-constructed structure made out of cane and braches, as appears in the “list of Houses, Cabins, and Gardens” from our historical archives. Brick houses of period were almost all white-washed, the tiled roofs being deep orange.

Growth commencement of the town had almost come to a stop after thirty years. In 1827 the town had been divided into an eastern and western half. The eastern half- towards Dakota- numbered 77 houses in 1837, 33 of which were brick ones. It appeared that the more fashionable quarter was to be found here, in the part of the town closest to Dakota. Almost half of the houses in this area were made out of local bricks. In the west half, the present waterfront, there were 108 dwellings, no more than 23 of them being brick ones.

The houses in Oranjestad were built in a very disorderly fashion, in spite of the 1822 regulation. Buildings were sometimes placed at less than fifty yards’ distance from the cannon on Fort Zoutman, effectively preventing the garrison from opining fire on any ship or object in the bay without firing right into them. There even was a house at a thirty meters’ distance from this “stronghold” making it impossible to dominate the countryside in times of unrest.

The roads were bad and pock-marked with holes. In the evening it was impossible to pick ones’ way through the maze of houses scattered about in the most haphazard fashion without coming a cropper as there was no illumination. Finally In November 1827 Commander Plats is forced “owing to excessive unmanliness of the streets and roads” to issue a regulation ordering everyone to clean the roads round his house and to clear away loose rocks. However inside the town cattle and livestock in general roamed about at will while pigs were rooting up the unpaved streets. Not before the close of the 19th century did what are now named Nassau Street and Wilhelmina Street get a few hundred yards of pavement consisting of what the Dutch call babies’ heads, i.e. cobbles. In 1858 the lieutenant-governor tries to put a stop to the cattle’s gadding about town. To no avail, for in 1930 they were still wandering there.

Love to know a little more about Aruba’s origins and cultural influences? Book your native thematic encounter through our exclusive presentations, a mind opening moment that has entertained curious hearts and adventurous souls for decades. Mail us at etnianativa03@gmail.com, our facilities and activities take place close to the high rise hotels.

Episode CXVIII- 118: Shells are not for souvenirs