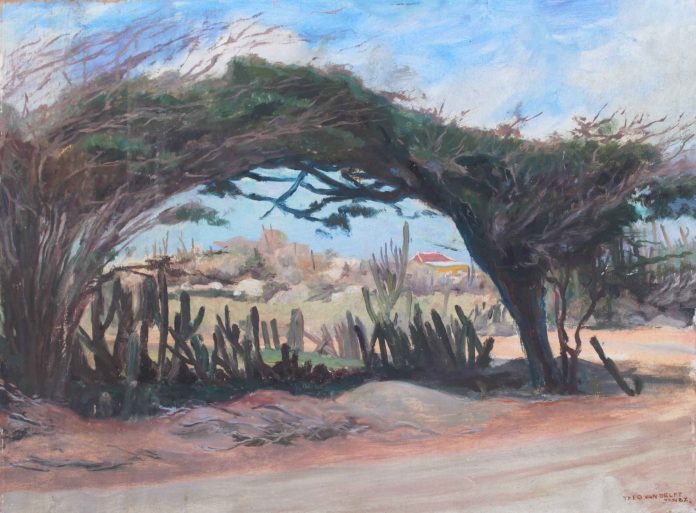 It is obvious that we cannot mention all those who participated and contributed with their love, passion and talent in our Dutch Caribbean expressionism that was always marked by exuberance, rebellion, impulses and feelings related to the temperament of the artist, but chose barely the following artists.

From out this early Dutch Caribbean expressionistic point of view and miscegenation, which combines realism and surrealism, alternating and adding abstraction and figuration, according to individual options of an art expression in constant renewal a particular style began to emerge in the mid-1940s.

Hubert “Lio” Booi who was born in Bonaire (*1919-+2014), but lived in Aruba since 1937 had shown his appreciation for our island trough and by every means possible which included art, music and literature. Lio has dedicated his life to Aruba and its culture and is also a co- author of Aruba`s National Anthem.

European artists, professionals and amateurs traveled to all the islands of the Caribbean, some of them establishing and inaugurated a local art related to the academy and styles of their Europe academies from the 19th and early 20th centuries.

Expressionism was a way of affirming identity. In short, the expressionism that, devoid of taboos and impositions, permeated the Netherlands Antilles, permeated an important sector of Anglophone art (English-speaking countries) -in particular Jamaica and Barbados-, reached the Francophones: Guadeloupe, Martinique, Haiti and flourished in 1950 in Spanish-speaking countries such as Santo Domingo and Puerto Rico and a decade later it arrived in Cuba as an ideological and aesthetic manifestation of shock. Dutch Caribbean Art development (Aruba and the Netherlands Antilles) in the former colonies in the beginning of the 20th century painters in Aruba also worked according to the traditional, European academic style.

The Greek artist, Johannes Pandellis (1896-1965) who went first to Suriname during the First World War and then left for Curacao in 1929, was one of the earliest artists working and teaching in the region, from who`s many works are still very valued by collectors.

Another painter was Theodorus Josephus van Delft, alias: Theo van Delft Jansz (1914- 2005) who lived in Curacao and Aruba for a while, he enjoyed painting rustic landscapes of our islands.

In 1960 Amigo de Curacao newspaper dedicated a column to Theo van Delft: – “It must have been about ten years ago that Theo from Delft came to Curaçao, coming from a family of painters himself, was offered a position as a teacher. Theo van Delft knew that what had started as an orientation trip could as well become a permanent situation and thus began his life in Curaçao” leaving behind beautiful works for the next generations to enjoy.

To get to know more about Aruba and its origins, its animals, culture etc., we highly recommend you to book your participation. Living our cultural encounter session is mind opening and entertained curious hearts for decades already. Mail us at etnianativa03@gmail.com. Our facilities and activities take place close to your place.