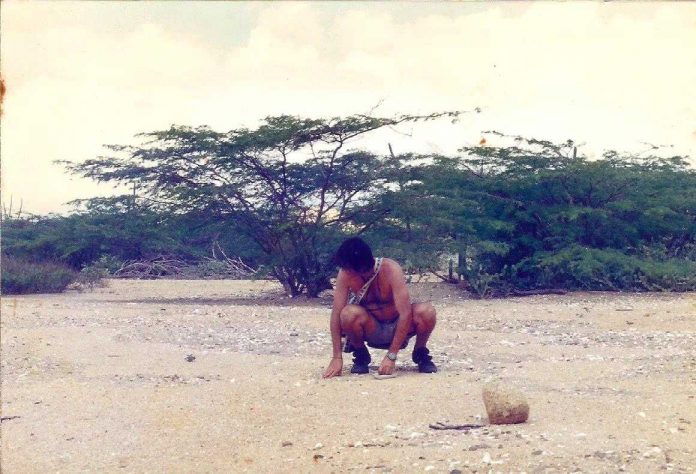 In Aruba we can differentiate three basic geological formations. One is a hilly part, second by an undulating part and a third part consisting of limestone which embraces these two zones mentioned before and forming also the coast line.

The giant boulders of Aruba are almost unique in the Caribbean. They are found at Ayo, Casibari, Santa Rosa, Paraguaná and many other places on the island. These formations have been explained as being remnants of ancient volcanic action. It has also been speculated that they once formed parts of landslides that came down from high mountains of South America, a few miles to the south. The clusters of these huge boulders are among the interesting geological aspects of the island. However these big boulders are manly magma that has cooled off before reaching the superficies.

Also known as part of the quartz diorite or granite landscape (Batholith formations) This we will find from the central part of Aruba towards the west and at the northwestern end of the island, and from the central part towards the east and south, the landscape is dominated by a rock unit which the main component is quartzdiorite. The landscape here is flat to slightly undulating with quartz cover by boulders. This rock is light gray in color and speckled whit black and white. It is relatively hard. The typical diorite landscape is found near Santa Cruz. These are all areas with boulders and small or larger patches of sand and vegetation. Places with few boulders and large areas of quartz diorite debris are found in the east part, Tanki Flip, Noord, Alto Vista and in the south of Savaneta. 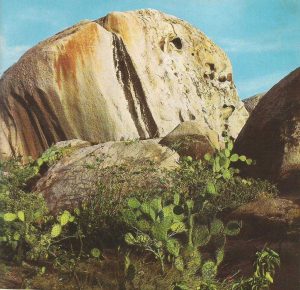 The rocks of the Aruba Lava Formation were extensively used by the inhabitants of the prehistory era. The physical characteristic of the rocks played a key role in determining the purpose for which it would be used. Diabase was used to make axes, chisels, knives and the polishers. The hardness and the homogeneous structure of the rock make it the best raw material for these artifacts available on the island. The polishers were collected at the bay`s on the northern coast and were then further polished by the Amerindians tribes who colonized our islands from out the mainland where to make similar tools and artifacts were made. Schist, a softer stone type was used to make pendants and beads; the green color was probably the determining it’s attraction. No tools of schist has been found, the sheet or scaled-like structure of the stone is a limiting factor when making an axe or chisel. The rock will easily split along the sheet-lines. Beads and pendants made out of similar rock type were found in archaeological areas_ and described in the literature as Aruba greenstone, however itis often difficult to establish what type of stone it refers to since the term greenstone covers a wide range of different green rock types (schist, rhyolite, jade).

Did you say that you love Aruba its origins and cultural heritage? Than this private encounter with our columnist anthropologist is just as you. Sessions created in a gorgeous setting for visitor with special interests. Appointment is required. Send us an email to etnianativa03@gmail.com or WhatsApp us at +297 592 2702 for a private reservation.