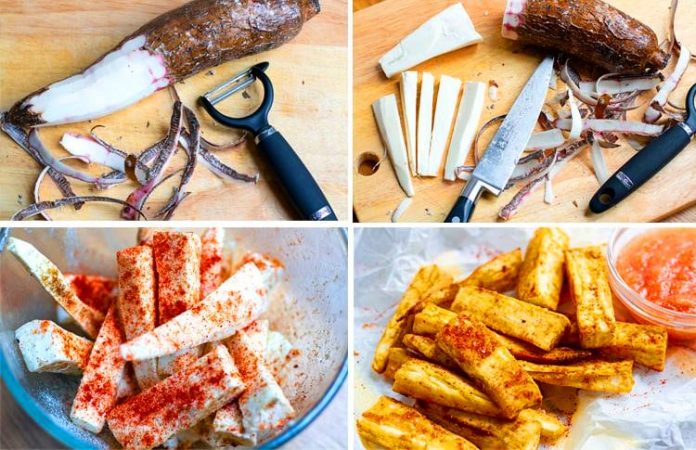 Destination values, native heritage, and cultural identity are what we advocate for in our own particular way of safeguarding all reasons to love Aruba. Etnia Nativa, through this cultural blog, “Island-Insight,” shares native cultural awareness, educates, and safeguards native heritage. It is how we encourage you to experiment with an island-keeper state of mind during your stay.

Have you ever tried cassava in Aruba? We believe cassava, or yuca, as it is known locally, should be designated as a world heritage food. This plant is native to Brazil and Paraguay, especially around the Amazon and Orinoco river basins. The root of this plant is used as a staple to make all kinds of foods. The roots are ground into flour and used to make a flatbread similar to a Mesoamerican tortilla. Manihot esculenta, commonly called cassava, manioc, yuca, macaxeira, mandioca, kappa kizhangu, and aipim, is a woody shrub that has been cultivated long before Europeans’ arrival.

Amerindians spread cassava throughout tropical areas of the South, Central America, and Caribbean islands. Through modern trade, cassava has become a world food just as corn, beans, potatoes, and tomatoes have been cultivated among many Amerindian societies spreading throughout the continent, becoming staples on which great civilizations have thrived.

Cassava, or yuca, is a root vegetable. The root can be eaten, and in some cultures it is also used as medicine. Cassava is used for tiredness, dehydration in people with diarrhea, sepsis, and to induce labor, yet there is no scientific evidence to support these claims.

Cassava is a basic food for many rural families with low resources. It has been considered a valuable food since the times of the aboriginal people, forming part of the selection of roots and tubers that the Cubans commonly refer to as “vianda.” It is known that one of the most recurrent indigenous foods in the Caribbean was the yuca, or cassava, food made from cassava that grew in these fields and predominated among the siboneyes, Caquetios, and Taínos, who were engaged in agriculture and harvested a range of crops, respectively. This was the first typical meal among most colonial Caribbean possessions—a substitute for the basic wheat bread diet. There was a saying widely used in popular Cuban slang and taken from the colonizers: “In the absence of bread, casabe.”

In the United States, cassava root is also known as bitter cassava, tapioca, Brazilian arrowroot, and yuca. Cassava and tapioca flour are not the same. Tapioca is a starch extracted from the cassava root through a washing and pulping process. The moist pulp is then squeezed to extract a starchy liquid. Once all the water has evaporated from the starchy liquid, only the tapioca flour remains. Alternatively, cassava flour is the whole root, peeled, dried, and ground. This means that it has more dietary fiber than tapioca flour.

In Aruba, native farmers used to plant and eat this root in many ways. As with cassava bread, the flour was mixed with water in a mash and cooked on a hot iron or clay plate. It was also an ingredient in stew that was fried. Ground yuca root was also cooked and used as a clothing starch.

Words of the renowned DR multimedia artist, Geo Ripley: “The cassava is an Amerindian cultural patrimony that has persisted in time and space till our days and is a symbol for us of this Caribbean Sea, which has always unified us and never separated us.”

Intrigued by Aruba`s origins and its cultural heritage? Then we encourage you to do something outside of the tourist grid. Become one of the exclusive visitors of Etnia Nativa, a private residential encounter set up, where you will be able to touch and be touched by authentic Aruba heritage, a spectacle of native art, archaic as well as archaeological artifacts, lithic tools, colonial furniture, and other items of islands bygone era. Get inside a recycled environment full of peace, relaxation knowledge, and information.

Etnia Nativa is, since 1994, the home of Anthony, our acclaimed columnist, artist craftsman and island Piache, who guides and lectures you through his resplendent collection. Etnia Nativa is the only place that recreates and introduces you to an authentic glimpse into Aruba’s native cultural heritage. Something completely different for a change—a contemporary Native Aruba experience!

Beautiful scenarios all around the Island