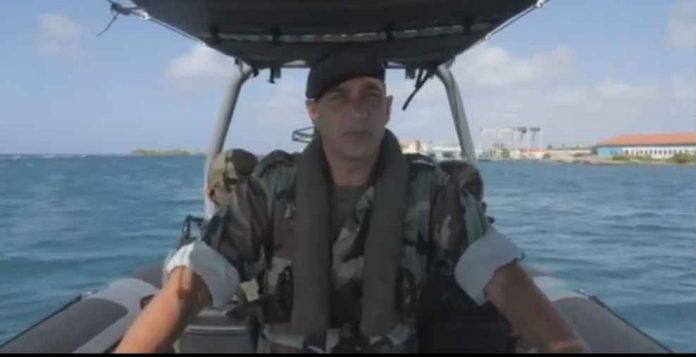 The Netherlands Marine Corps (Dutch: Korps Mariniers) is the elite infantry component of the Royal Netherlands Navy. The unit is specialized in special operations, operating under highly extreme conditions and amphibious warfare. The Korps Mariniers are a rapid reaction force that can be deployed to any location in the world within maximum 48 hours. Their motto is Qua Patet Orbis (“As Far As The World Extends”). This year they celebrate their 355 years of existence. The defense on Aruba is the responsibility of the Kingdom of the Netherlands and therefore there is a reason to celebrate along.

Amphibious and Special Operations that is the main job of the Marines. It means that the maritime light infantry units can operate on sea, land and their borders. From warfare and humanitarian aid, to secret reconnaissance and counter-terrorism. The corps is also distinguished by its expertise in the field of warfare in river deltas (riverine) and in arctic, mountainous and desert conditions.

The Corps was founded on 10 December 1665 during the Second Anglo-Dutch War by the Prime Minister of the Dutch Republic, Johan de Witt, and Admiral Michiel de Ruyter as the Regiment de Marine. Its leader was Willem Joseph van Ghent. The Dutch had successfully used ordinary soldiers in ships at sea in the First Anglo-Dutch War. It was the fifth European Marine unit formed, being preceded by the Spain‘s Infantería de Armada (1537), the Portuguese Marine Corps (1610), France‘s Troupes de marine (1622), and the English Royal Marines (1664) but the first corps in history to be specialized in amphibious operations. Like Britain, the Netherlands has had several periods when its Marines were disbanded. The Netherlands itself was under French occupation or control from 1810 until 1813. A new Marine unit was raised on 20 March 1801 during the time of the Batavian Republic and on 14 August 1806 the Korps Koninklijke Grenadiers van de Marine was raised under King Louis Bonaparte. The modern Korps Mariniers dates from 1814, receiving its current name in 1817.

The deployment of the Marines nowadays varies from warfare and training to (natural) disaster relief and humanitarian aid. One minute the Marine is fighting and shortly after that he is providing aid, maintaining order or training foreign soldiers. This requires the ability to switch quickly between the roles of combatant, trainer, order guard and counselor.

The Marine Corps is inextricably linked to the Royal Netherlands Navy. It also works with civil and military partners at home and abroad. Since 1973, the Marines have been embedded in the United Kingdom-Netherlands Landing Force (UK / NL Landing Force). In this amphibious unit, the Marine Corps works closely with the English Royal Marines. The unit is part of the Joint Expeditionary Forces. With this, England and the Netherlands, among others, make a joint contribution to the “flash force” of NATO to be established.

In the Netherlands, marines are part of the system of Special Forces to protect the Netherlands against terrorism. Within the Special Interventions Service (DSI), for example, they work closely with the police and the military police.

Defense on Aruba is the responsibility of the Kingdom of the Netherlands. The Netherlands Military forces that protect Aruba include the Royal Netherlands Navy, the Netherlands Marine Corps and the Netherlands Coastguard. There is also a small indigenous “Arubaanse Militie” (ARUMIL) (litr. “Aruban militia”) of about platoon strength. All forces are stationed at Marines Barracks Savaneta.

Up to 1929, there were hardly any military forces present on the Dutch Antilles including Aruba. On the 28th of June 1929 the Venezuelan rebel leader Rafael Simon Urbina attacked Curaçao and took several hostages amongst whom was the governor L. A. Fruytier and the garrison commander Borren. They were all taken to Venezuela where Urbina had hoped to overthrow the Government. His attempt failed and Urbina was taken prisoner. All hostages were returned to Curaçao. Three Dutch soldiers were killed in action during this attack. After Urbina’s attack, the Dutch government decided to station one naval ship (“stationsschip”) in the Antilles permanently. It also decided to raise a volunteer defense corps on both Curaçao and Aruba (vrijwilligerskorps Curaçao (VKC) and Vrijwilligerskorps Aruba (VKA)). After World War II, the VKA and VKC were predesignated Antiliaanse Militie (ANTMIL) which still exists on Curaçao. When Aruba obtained its independence within the Kingdom of the Netherlands in 1986, the ANTMIL on Aruba was predesignated Aruban militia or ARUMIL.

Changes in the law regarding tobacco products