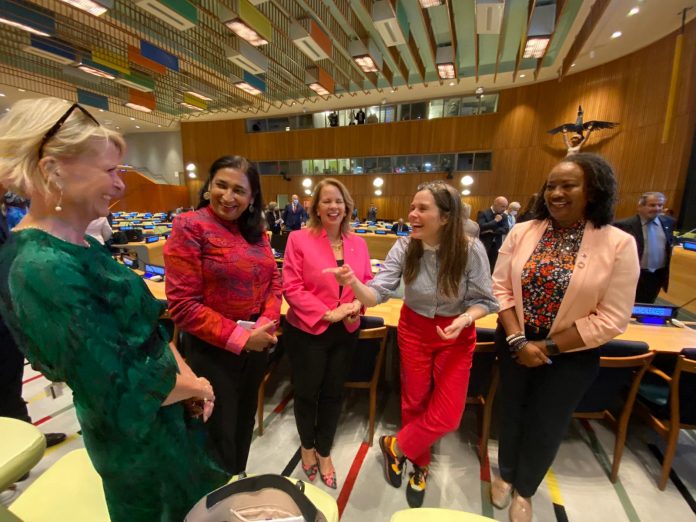 During the General Assembly of the United Nations that is taking place in New York, prime minister of Aruba, Evelyn Wever-Croes attended the conference of Women Leaders. During this meeting, the prime minister explained how as a woman she led Aruba during the pandemic together with other female professionals, and elaborated on the importance of ensuring that other women are being prepared for leadership positions.

On this occasion, thoughts and concerns were exchanged with other women leaders from other countries.

Aruba is currently in the process of recovery and bouncing back after experiencing various crisis situations. Prime minister Wever-Croes commented that just like her, different women present at the conference were also leading during difficult times. In this context the impact of women leaders worldwide is recognized. The prime minister explained that it is important to think about how as a country we are preparing other women to ‘climb the ladder’ also in the future and exchange ideas to not leave this to chance.

Currently the focus in Aruba is on the field of education. It is known that children who are now in primary school, in the future will work in positions that do not exist yet. So it is important to consider how we are preparing them for the future, and if this is enough. “We know that science, technology, engineering and mathematics (STEM) is a very important area of education for children”, Wever-Croes said. Considering this, there are various initiatives that have taken place with projects to motivate girls in this area. A project mentioned by the prime minister that took place is Supernova, where girls who participated received experience in the field of STEM and necessary information to be successful in this area.

Prime minister Wever-Croes finalized by saying it was an honor to exchange thoughts and ideas on this important subject together with female prime ministers from other countries.

The Casino at The Ritz-Carlton is celebrating 5 years

Honoring loyal visitors at the Divi All Inclusive Resorts