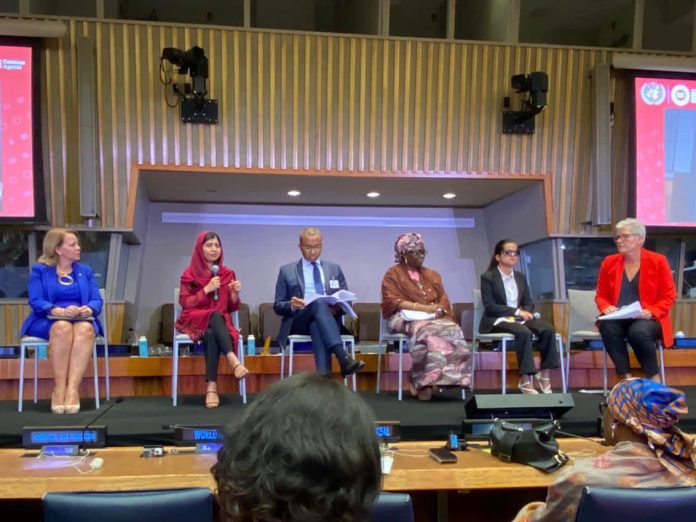 Prime minister of Aruba, Evelyn Wever-Croes took part in a panel together with, among others, Malala Yousafzai on the subject “Call to action to advance gender equality and girls and women’s empowerment in and through education”. Here, the topic “leaving no one behind” was also discussed. The prime minister explained everything Aruba is doing on gender equality and inclusivity.

As was previously announced, this week the prime minister is in New York to attend the General Assembly of the United Nations. In this context there are various meetings of interest for each country, and during these, Wever-Croes is providing information on what Aruba is doing regarding education during the “Transforming Education Summit 2022”.

Primarily, Wever-Croes gave a brief explanation on how Aruba dealt with education during the Covid-19 pandemic. Aruba kept schools closed for only three months, after which schools were opened once again. The reason behind this was because Aruba realized that women, older persons and children were those who were disproportionally affected by the pandemic.

Regarding gender equality in education in Aruba, the prime minister shared some data. In Aruba, the amount of female and male children who can read and write is almost the same. Around 97 percent of the group of people older than 15 years is considered literate and there isn’t much difference between men and women in this.

While Aruba is making efforts to eliminate the gap between different genders in education, it was noted that there are more females registered in secondary school and university. Women have twice as much chance to follow advanced education. The percentage of women who continue studying after secondary education was 21 percent in 2016, compared to 11% of men.

However, it was noted that there is a difference when looking at STEM studies, when it is only a small fraction of females who participate in this type of study.

As an initiative to address this, Aruba launched the “STEM the GAP Project” through Supernova, in order to create more interest and to encourage more female children to continue an education in STEM (Science, Technology, Engineering and Mathematics).

Prime minister Wever-Croes continued saying that this situation is not only in Aruba. Globally more women pursue advanced education compared to males, thus this loss of interest is a concern all around the world. In this context it is important to see what the possible origin might be for this situation. Norms and expectations of certain gender also have an impact on male children, their motivations and wishes to study in different ways, the prime minister commented.

In Aruba, the national plan for education is based on the Sustainable Development Goal number Four, which is aligned to the principles of equality. Aside from this, recently the first National Gender Policy was finalized with the goal of addressing gender inequality and to ensure access to quality education for one and all.

In this context it is important to focus so that male children will not be excluded when coming up with efforts for gender equality, same for female children. Contrary to this, education based on equality benefits girls, boys and society.

Finalizing, the prime minister said: “If we ensure better education and a fairer society, a country will prosper more. In Aruba we are committed to this and we hope to be learn from others and work together to achieve necessary changes. This is something that as leaders we owe to our future generations. As was mentioned, girls are in the group of those most affected during Covid-19 pandemic, and if we don’t take this into consideration now during recovery, we run the risk of losing everything women fought for and achieved.”