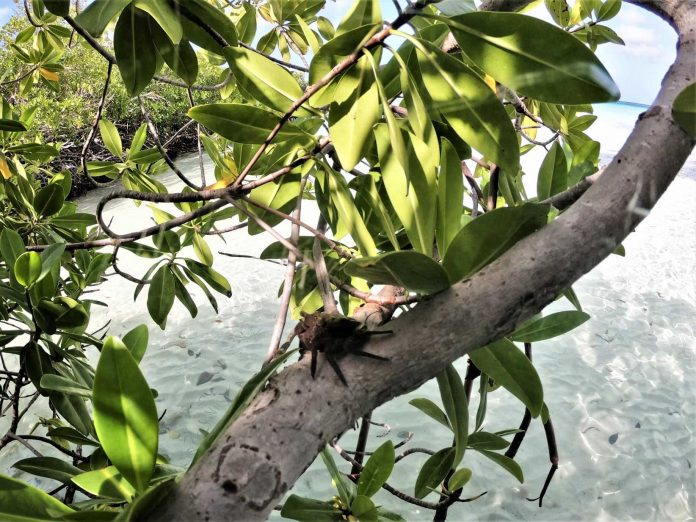 July 26 marks the International Day for the Conservation of the Mangrove Ecosystem, adopted by the General Conference of UNESCO in 2015 and celebrated each year on July 26. With this, UNESCO aims to raise awareness of the importance of mangrove ecosystems as ‘a unique, special and vulnerable ecosystem’ and to promote solutions for their sustainable management, conservation and uses.

DNM has calculated the area of mangrove coverage by making use of the program ArcGIS which coordinates system Tranverse Mercator Aruba. The polygon (a geometric figure) is used to measure the total area covered by mangroves which resulted in the percentage of 1, 15. The project was a collaboration between DNM and the Department of Infrastructure and Planning (DIP). The areas of mangrove son Aruba are: Rincon, Daimari, Zeewijk, Rif Renaissance, Bucuti Aeropuerto, Parkietenbos, Rif Palm Island, Bubali Plas, Boca Grandi, Mangel Halto, Rif Mangel Halto, Barcadera, Saliña Cerca, Eagle Beach, Bubali Plas, Santo Largo, Baby Beach and Rif San Nicolas. Mangroves also are present in the areas of Parke National Aruba and Rooi Prikichi.

Aruba has four kinds of mangroves: the red mangrove, the black mangrove, the white mangrove or Shimaron and the Fofoti. All mangroves are protected by law as incorporated in our national decree for the protection of local flora and fauna (Landsbesluit bescherming inheemse flora en fauna – AB 2017 no 48). Also the plants are protected by international laws (Special Protected Areas and Wildlife or SPAW protocol). The recently official made protection of 16 nature areas on the island by law include the protection of our mangroves.