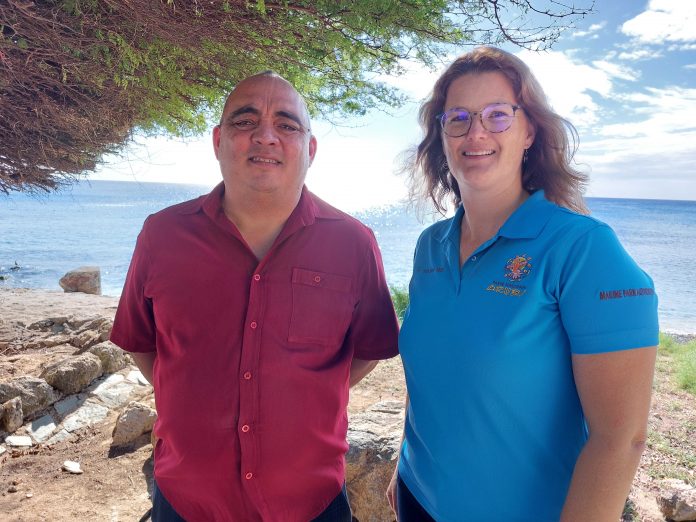 This week, during a joint press conference by Aruba National Park Foundation (FPNA) and the Department of Nature and Environment (DNM), information was given about coral disease that is causing concern for the local marine life.

Giesbert Boekhoudt, director of DNM, indicated that for a long time already in the Caribbean there are different corals that are being affected by different kinds of disease, and they have been preparing for this for a long time.

Boekhoudt explained that they have the data of the investigation in the report by Carmabi which showed the situation of the corals; however, right now nature itself is showing that it is under pressure and there are hard corals in bad condition.

“For two to three months we have been preparing for this day to come. We prepared a system to address this in a standard way to inform the public and other stakeholders and people who use the ocean. There is great concern because other islands already got it, and the sea landscape is not looking good when the disease continues to spread”, Boekhoudt commented.

Sietske van der Wal, interim manager of the Marine Park of FPNA elaborated on the disease and explained what can be done to reduce the pressure on the sick corals. Van der Wal explained that they noted different coral disease in the Caribbean region, including Aruba, and one of them can be very severe. They received some suspicious, alarming images, and went to investigate on the field.

Aside from this, Van der Wal indicated, they took different photographs of the coral to receive assistance from experts abroad to identify if this is Stony Coral Tissue Loss Disease (SCTLD). But when they sent the photographs, it was still difficult to distinguish which specific disease was noted, and thus they had to find another way to find out the precise disease.

“Something very important that we had to do to distinguish between different diseases is to cover it for some time. This way you can see how in a short time, in this case four days between the two moments of observation, how fast the disease is progressing. Through photographs it could be observed that the disease on certain corals progressed a few centimeters in only four days. It is important to mention that coral grows very slowly, about 1cm per year, thus to lose a few centimeters in only four days is very severe”, Van der Wal emphasized.

The photographs show that the disease is progressing fast and if it keeps advancing on the corals at that speed, this means that the corals where the disease is now present can be completely lost within two weeks to one month. “This is something that we need to be worried about. But let’s not lose hope, there is a lot that can be done that is part of the solution”, Van der Wal indicated.

She called on everyone to help contain, or try to contain, the disease as much as possible. It cannot be completely contained because the ocean stays connected, marine life keeps coming, but the human being can make sure to not bring the disease from one area in Aruba to another, and this can be done through decontamination of everything that a person wears or uses.

When diving, snorkeling or fishing, it is necessary to decontaminate the equipment and tools used for these activities. It is also very important to let equipment and materials dry before going to another site. FPNA also asks everyone who goes in the water, in the sea, if they see something suspicious to point that out to FPNA so they can investigate it right away, and also so they can have an idea of the spread of the disease around Aruba.

Van der Wal highlighted that it is not only disease that is impacting the corals; there is a lot of different impact on the corals and this needs to be reduced. “For example, the presence of boats in the ocean, boats with a lot of people on board. This is why it’s important for them not to touch the coral, not step on the corals, they are living animals. Also to use the right sunblock, so make sure with sunblock that is used. Preferably this needs to be reef safe, and even better is to cover using clothing and avoid sunblock altogether”, she pointed out.

She continued explaining that contamination coming from shore also needs to be reduced. There are many different ways how pollution enters the sea, including sewage, fertilizers and pesticides use in gardening. “We need to be a lot more careful of what we use and when we use it, because with rain, in the end everything ends up in the ocean.”

She emphasized that it is important for the public to help with this. At the same time, they are also trying to find more information, through experts, on how to establish the capacity to make like a “Noah’s Ark” for corals that are still alive and not affected, to maintain a reserve so that when the disease has passed, corals can be placed back. Van der Wal indicated that this takes times, but it is a solution on which they can work and they are evaluating how to reach the necessary expertise as well as materials and funds.

Regarding other areas around Aruba, Van der Wal explained together with DNM based on the Carmabi report published a few years ago on the state of the corals, they search which areas have the most corals affected by SCTLD and these areas will become the main focus to investigate if the disease has gone further.

Finally, she added that soon there will be a call also for volunteers who can assist with monitoring these areas. She explained that FPNA and DMN together there is a lack of people to do the survey. There will be more information available soon for those willing to help identify and monitor this disease.

California Lighthouse is closed for the public