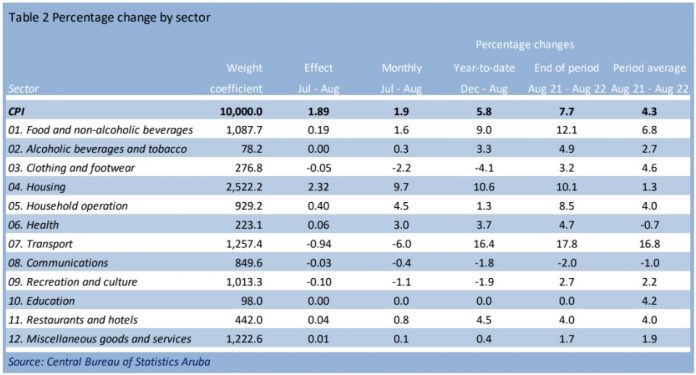 The Central Bureau of Statistics presents the most important findings for the Consumer Price Index (CPI) for the month of August 2022.

Consumer Price Index for the month of August 2022

During this month, seven (7) of the twelve (12) sectors registered increases in prices. The increases that had the greatest influence on the CPI were registered for the “Housing” (9.7%) and “Household operation” (4.5%) sectors, which contributed with an effect of 2.32 and 0.40 ppts, respectively. The

The decrease in the “Transport” sector was mainly due to a decrease in the category “Operation of personal transport equipment” (-8.9%), which contributed to an effect of -0.90 ppts.

The CPIC (core inflation) – CPI excluding the effect of energy and food – was 2.5% in August 2022. The energy index – which consists of the products: electricity, water, gasoline and diesel – was 10.8%. The food index showed an increase of 7.1%.

Change in prices of crude oil, utilities, gasoline and diesel in August 2022

Change in prices of Food & catering services in August 2022

The only decrease was registered in the index of “Potatoes and other tubers” (-4.6%).

On their 37th trip to Aruba, Marie and Norm Whelan celebrating...

One of the Top 10 Romantic Hotels in the World is...