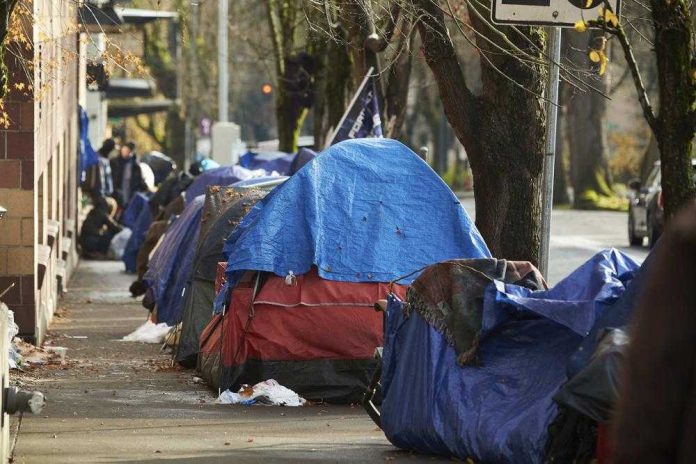 PORTLAND, Ore. (AP) — The tents proliferating on sidewalks in downtown and residential neighborhoods across Portland, Oregon, are fueling a debate that’s playing out in cities nationwide as the homelessness crisis in the U.S. explodes: Should camping be banned anywhere except in sanctioned sites?

Republican-led states including Texas and Missouri have passed laws in the past couple years prohibiting street camping while diverting money from affordable housing projects to short-term shelter solutions.

Now, after decades of struggling to tackle homelessness, some progressive West Coast cities are considering similar plans. Portland City Council members will vote Thursday on a proposal to create at least three large designated campsites and ban the rest of the roughly 700 encampments currently scattered across the city. More than 3,000 people are living without shelter in Portland, a 50% jump from 2019, according to the proposal.

“The magnitude and the depth of the homeless crisis in our city is nothing short of a humanitarian catastrophe,” Portland Mayor Ted Wheeler said last month when he unveiled the plan. “We need to move our scattered, vulnerable homeless population closer to the services that they need.”

But opponents say the camping restrictions effectively criminalize homelessness and fail to address its root causes.

“As visible homelessness has increased, there is also an increase in pressure from the public and from others for elected officials and other folks in positions of authority to address that issue,” said Ann Oliva, CEO of the National Alliance to End Homelessness. “What’s starting to happen is that the way to immediately address an issue that is at its core an affordable housing problem is to try and remove people from public view.”

Portland’s soaring homelessness has become a top concern for the vast majority of residents and has prompted legal action. A group of people with disabilities has sued the city over tents blocking sidewalks and making them inaccessible.

Portland’s proposal would establish at least three designated sites where camping would be allowed, with an initial capacity to serve about 150 people each. They would have 24-hour management and provide access to services such as food, hygiene, litter collection and treatment for mental health and substance abuse.

Outreach workers would direct people living on the street to the designated camping sites. Those who refuse could be cited, but the citations could be waived if the person takes part in a diversion program that would require mental health or substance abuse treatment in lieu of jail time.

Denver, Colorado, and Austin, Texas, have also passed ordinances both banning public camping and allowing sanctioned campsites. Denver has opened several “safe outdoor spaces” since 2020 where tents, food and other services are provided. In Austin, the Esperanza community is a sanctioned encampment that serves about 150 people and is currently constructing 200 individual shelter units.

The Cicero Institute, which wrote the model legislation that inspired many of the recent camping ban policies, says creating specific areas where camping is permitted can be a faster solution for cities compared to building affordable housing.

“One of the biggest problems that sanctioned camping is trying to address is just the unbelievable difficulty of getting more shovels in the ground to get shelter or other sorts or services available for the homeless,” said Judge Glock, the group’s senior director of policy and research.

“The answer can’t possibly be for these cities, wait two or three decades and we’re going to build enough permanent housing. In the meantime, we’re going to see tens of thousands of people die out on the streets,” Glock said.

But many homeless advocates say that a “housing first” approach is the only way to address the underlying factors that cause homelessness.

“Rounding people up with nowhere else to go is not only cruel and impractical, but forcing them into giant camps cannot possibly be a culturally competent or equitable situation,” Mark Guzman, founder of the food nonprofit MealsonUsPDX, said at a contentious Portland City Council meeting last week.

“If you truly want to end homelessness, the only way forward is with housing first,” said Guzman, who said he previously experienced homelessness himself. “People need love, compassion and resources to escape a situation of homelessness.”