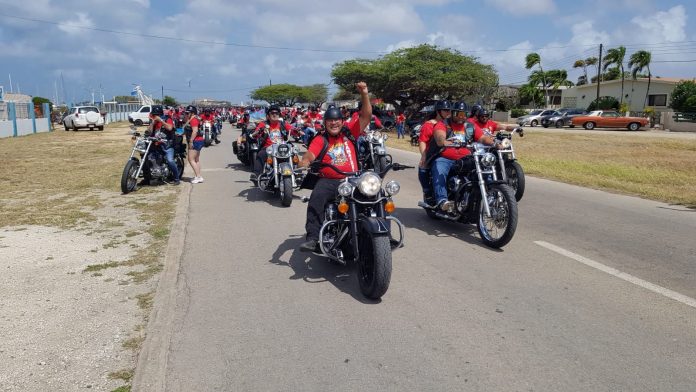 Mr. Croes explained that normally they hold their press conference for this on the 8th of March, but this time they are bringing it forward because at the beginning of the year there are a lot of activities like Carnival, and when the 8th of March comes around, people are not aware and are busy with other things. They need to put this together properly and inform the community about the bikers’ event after they’ve been through Carnival.

This year, Camacuri Harley Davidson Club Aruba is marking their 25th anniversary, but as Croes commented, this went quietly because the island was still under the effects of the Covid pandemic. He explained that he had a meeting with minister of Justice and Social Affairs, Mr. Rocco Tjon in order to obtain a permit for a celebration, and the minister said that while they could receive a permit, they should not advertise until the amount of cases went down.

“When we got the green light it was honestly a week before the event, and this is why I say it went by quietly. But this year it will be 26 years, I will say 5 lustrum+, and we said that we will begin with a press conference before the change of the year to inform the entire island so they can prepare for next year; to every biker, the clubs who always participate, both from Aruba and abroad.”

Croes commented that the activities for the 18th of March – Flag and Anthem Day – normally begin on the 8th of March with the press conference announcing the official schedule. The schedule mentioned today is tentative in order to give insight on what will be taking place.

It will begin on the 15th of March with unloading of the containers that bring bikes from Curacao, Bonaire and Suriname, which will come to Aruba to participate. Suriname bikers have already come in the past but without their bikes, they rented or borrowed bikes here on the island. But this time they are bringing a container with their own bikes. There will also be a group from Colombia present.

On Thursday 16th of March will be the official registration for the event on the 18th of March. Registration will take place at Hooters. Friday 17th of March there will be a night ride, during which the club will visit some sites around Aruba, finishing in One Bar.

“Thanks to One Bar to receive us at home. We are very glad that they are receiving us”, Croes pointed out.

Croes explained that during the day, if everything goes according to plan, there will be an event in Palo Marga. He said that for this weekend a lot of bikers are coming from Curaçao and Bonaire, and the Aruban bikers will also be present doing fever on the street – although in the past authorities called their attention for this.

Croes commented that if they go to Palo Marga – a racing track – they can organize an event and have racing, drifting, etc. and avoid the dangers of having these activities on the street, not only for themselves but for the public on the road as well.

Sunday the 19th of March is the day in which officially Camacuri Harley Davidson Club goes on the streets for a ride. They always begin with a breakfast and then go on the ride and play different games, which for many years include different stops. Right now they still have not confirmed where this ride will end.

Croes commented that many times they approach the government of Aruba, and this time they received help from the minister. “This year they helped us, and next year the minister said they will be better prepared. We hope it will be something positive.”

“We need the help because it costs a lot. It truly costs a lot of money and a lot of work. It is not only me doing this, but I have a team, a directive and we also have our members. I always say that if you don’t have members, you don’t have a club. The members give you the motivation to continue fighting to reach where you want to go”, Croes said.

Aruba to me: Ken and Paula Phillips