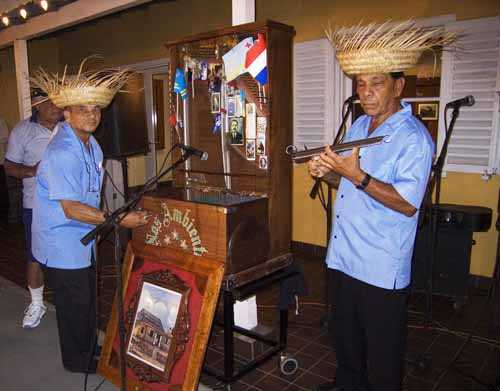 The book was presented to Mrs. Britten by the authors of the book, Mrs. Marilyn Alcalá-Wallé, Herta Parabirsing-Balentina, and Nidia Rosaria- Wallé, who traveled from Curacao to Aruba for this special occasion. The library added the book to its collection of the Caribiana’s department Arubiana. This book provides plenty of information about the typical instrument, the Cylinder Piano, locally known as the Kaha di Orgel. The book describes the origin of the Caha di Orgel in Curacao, its makers and players, party organizers, Wiri players and their origin, folkloric dance instructors, and much more information. Those intrigued with the Caha di Orgel are welcome at the Arubiana for plenty of information. 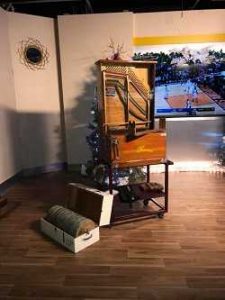 A Musical Peek at History

Performances of the Caha di Orgel will enchant you, but there is more. The cylinder piano, was already known in England at the beginning of the 19th century. This music box spread rapidly across Europe and reached Venezuela via Italian migrants. In those days, there were intensive trading relations between Curacao and Venezuela. A native of Curacao who was staying in Venezuela at the time was Horacio Sprock. He brought the ‘ka’i orgel’ from Barquisimeto, Venezuela, to our country and, together with his brother Luis, started a local workshop here. The first ‘ka’i orgels’ of Curaçao and Aruba were made in Italy. They could be heard during the celebrations in the salons of the local elite, where they were accustomed to dancing to piano music and music for strings. Soon this music spread over the working-class districts of Otrobanda and Punda and to the conuco, the countryside. For their celebrations, people would hire a ka’i orgel in town. Until the thirties, it was transported by means of horse and cart or a donkey, and afterwards a motorized vehicle. The ka’i orgel –a combination of the sound of a piano, kwarta, bass and guitar- was soon enriched with the rhythmic instrument of African origin, the wiri or metal scraper. In the ka’i orgel tradition of Curaçao, Aruba and Bonaire, these two instruments belong inseparably to each other.

More information about the Caha di Orgel of Aruba is to be seen and heard at YouTube: Tesoro Arubano where a series of 10 short documentaries is presented dealing with cultural historical topics of Aruba among others the Caha di Orgel.