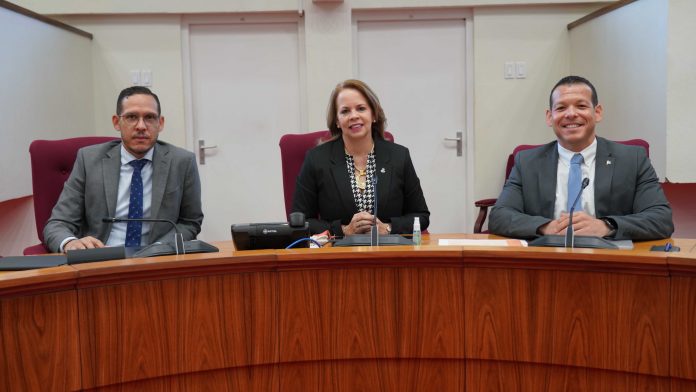 During a public meeting in Parliament yesterday morning to discuss the reopening of the border with Venezuela, Prime Minister Evelyn Wever-Croes gave an explanation of the policy of the commission in charge of this. Seeing as the crisis in Venezuela has escalated, the commission was installed and tasked to also provide advice to the government on this matter.

The Prime Minister indicated that the commission advised the government to keep the border closed, mainly because they are still at the deliberation table and also because of the risks associated with reopening. The government does this through at Landsbesluit (national decree) which is issued every three months or less. The last advice was to extend the closure for three more months until the end of the year, but if agreements are reached before then, the change can be made to reopen the border.

The commission consists of different stakeholders and consults with other stakeholders. It is directed by Bureau Rampenbestrijding Aruba (BRA – Disaster Management Office) and is carrying out conversations with Directie Buitenlandse Betrekkingen (DBB – Department of Foreign Relations), Veiligheidsdienst Aruba (VDA – Security Service), the Police, Dimas (Department of Immigration), DVG (Department of Public Health), Directie Sociale Zaken (Department of Social Affairs), DOW (Department of Public Works), Directie Luchtvaart (Department of Aviation), ATA (Aruba Tourism Authority), Immigration of Aruba, Ports Master of Aruba, Coast Guard and representatives from the ministry of Justice in charge of border enforcement in regards to the country package agreed with the Netherlands; also included is the Department of Economic Affairs and a representative of the ministry of Economic Affairs to deal with the economic aspects of this issue.

On the government’s request, the commission has been working for a while on this topic, which is distinguished in four different types of reopening. The first two are regarding maritime traffic and the other two are regarding air traffic.

Regarding marine traffic, the first that is being thought about is to open the route of the quay from Venezuela to Aruba in order to transport fruit, vegetables and certain materials. After this, the next step would be to open for private yachts, something that is currently not allowed.

For the air traffic part, it is thought to open the main airport, Queen Beatrix with flights from Aruba to Venezuela and from Venezuela to Aruba. The next part would be to also open for private jets.

Currently, they are working on the maritime part. The government was written down a list of conditions with concrete agreements. Among other conditions are the documents that a ship’s captain needs to have in their hands before leaving the port in Falcon and before entering Aruba. “This is already something that works well, and is what we want this time as well”, the Prime Minister said.

Various stakeholders, among others the Police Department and Immigration, have identified the risks presented by reopening the border. Dimas also indicated that their main cause for concern when reopening the border is for asylum. This is a very delicate subject because it is about people and the suffering of people.
They are also worried about family visits that will begin, and many of these visitors do not leave. This is the trend that was observed in the past, the so-called “overstayers”. People remain in Aruba and enter the illegal circuit, which represents a problem for Aruba.

“I have every confidence that if both parties show the willingness to reach agreements we will come out. We live together with the situation in Venezuela which pains us, because many of us have family members who come from Venezuela. We have cultural and economic ties. Venezuela is a lot closer than other countries. But we cannot solve the problem of Venezuela. We are fighting to solve our own problems, but the problem of Venezuela and in Venezuela, they need to solve it themselves. Meanwhile we must ensure that Aruba recovers and is strong, so that we can stand on our own and help all those who live here. Whether you were born here or not, it is our responsibility to help all those who are here. Improve the quality of life for our people, create more jobs for them also, and ensure that there is high level education for all our children. And when we are standing strong, we can better help other countries”, the Prime Minister said.

Mario Tromp, Senior Agent at Playa Linda: “Because we know the...