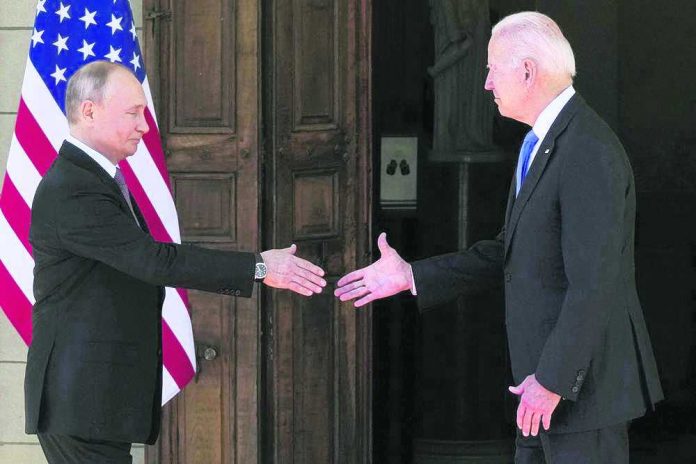 By AAMER MADHANI and DASHA LITVINOVA

WASHINGTON (AP) – Face to face for over two hours, President Joe Biden and Russia’s Vladimir Putin squared off in a secure video call Tuesday as the U.S. president put Moscow on notice that an invasion of Ukraine would bring enormous harm to the Russian economy. The highly anticipated call between the two leaders came amid growing worries by the U.S. and Western allies about Russia’s threat to its neighbor.

Putin came into the meeting seeking guarantees from Biden that the NATO military alliance will never expand to include Ukraine, which has long sought membership. The Americans and their NATO allies said in advance that Putin’s request was a non-starter.

There appeared to be no immediate breakthroughs to ease tensions on the Ukraine question, as the U.S. emphasized a need for diplomacy and deescalation, and issued stern threats to Russia on the consequences of an invasion.

He added that Biden said the U.S. would also “provide additional defensive material to the Ukrainians above and beyond that, which we are already providing, and we would fortify our NATO allies on the eastern flank with additional capabilities in response to such an escalation.

Sullivan said that could include additional deployments of U.S. troops to eastern European NATO allies.

“As we pursue diplomatic channels, we will also prepare for all contingencies,” he added.

Meanwhile a top U.S. envoy, Victoria Nuland, said a Russian invasion of Ukraine would jeopardize a controversial pipeline between Russia and Germany. She told the Senate Foreign Relations Committee Tuesday that if Russia invaded, “our expectation is that the pipeline will be suspended.”

As the U.S. and Russian presidents conferred, Ukrainian officials grew only more anxious about the tens of thousands of Russia troops that have been deployed near their border. Just hours before the start of the Biden-Putin video call, Ukrainian officials charged Russia had further escalated the smoldering crisis by sending tanks and snipers to war-torn eastern Ukraine to “provoke return fire” and lay a pretext for a potential invasion.

U.S. intelligence officials have not been able to independently verify that accusation, according to an administration official who spoke on the condition of anonymity to discuss the sensitive matter. But the official said that the White House has directly raised concerns with the Russians about “resorting to their old playbook” by trying to provoke the Ukrainians.

Kremlin spokesman Dmitry Peskov refused to comment on the allegations, redirecting questions to Russia’s Defense Ministry, which made no immediate comment.

In a brief snippet from the start of the meeting broadcast by Russia state television, the two leaders offered friendly greetings to each other. “I welcome you, Mr. President,” Putin said, speaking with a Russian flag behind him and a video monitor showing Biden in front of him.

“Good to see you again!” Biden replied with a chuckle. He then noted Putin’s absence from the recent Group of 20 summit in Rome. The Russian took part in the major gathering of industrial nations by video link because of concerns about COVID-19 at home. “Unfortunately, last time we didn’t get to see one another at G-20,” Biden said. “I hope next time we meet to do it in person.”

More sternly, he made clear during the call that the U.S. stands ready to take actions that would exact “a very real cost” on the Russian economy, according to White House officials.The Kremlin in its readout described the call as “candid and businesslike.”

“Putin emphasized that it’s wrong to put the responsibility on Russia, since it is NATO that has been making dangerous attempts to expand its presence on the Ukrainian territory and has been expanding its military potential near Russian borders,” the Kremlin said.

The Kremlin said that the Russian leader also proposed to lift all mutual restrictions on diplomatic missions and help normalize other aspects of bilateral relations.

Sullivan said Biden did not make any commitments on the matter, and said the leaders would direct their staffs to continue negotiations.

Putin, for his part, demanded guarantees from Biden that the NATO military alliance will never expand to include Ukraine, which has long sought membership. That’s a non-starter for the Americans and their NATO allies.

The leader-to-leader conversation — Biden speaking from the White House Situation Room, Putin from his residence in Sochi —was one of the toughest of Biden’s presidency and came at a perilous time. U.S. intelligence officials have determined that Russia has massed 70,000 troops near the Ukraine border and has made preparations for a possible invasion early next year.

Sullivan, speaking after the call, said the U.S. believes that Putin has not yet made a final decision to invade

Biden was vice president in 2014 when Russian troops marched into the Black Sea peninsula of Crimea and annexed the territory from Ukraine. Aides say the Crimea episode — one of the darker moments for President Barack Obama on the international stage — looms large as Biden looks at the smoldering current crisis.

As for NATO, Poland, Hungary and the Czech Republic were formally invited in 1997 and joined in 1999. They were followed in 2004 by Bulgaria, Romania, Slovakia, Slovenia and the former Soviet states of Estonia, Latvia and Lithuania. Since then, Albania, Croatia, Montenegro and North Macedonia have joined, bringing NATO’s total to 30 nations.

In Washington, Republicans are framing this moment as a key test of Biden’s leadership on the global stage. Biden vowed as a candidate to reassert American leadership after President Donald Trump’s emphasis on an “America first” foreign policy. But Republicans say he’s been ineffective in slowing Iran’s march toward becoming a nuclear power and that the Biden administration has done too little to counter autocratic leaders like China’s Xi Jinping, Iran’s Ayatollah Ali Khamenei and Putin.

“Fellow authoritarians in Beijing and Tehran will be watching how the free world responds,” Senate Minority Leader Mitch McConnell said from the Senate floor on Monday. “And President Biden has an opportunity to set the tone when he speaks with Putin.”

Sullivan said Biden and Putin had a “good discussion on the Iran issue” and called it an area where the two countries could cooperate.

“The more Iran demonstrates a lack of seriousness at the negotiating table,” the more there will be a sense of unity among the U.S. and the parties to the 2015 nuclear accord including Russia and the European Union, he said.

Trump, who showed unusual deference to Putin during his presidency, said in a statement that “Vladimir Putin looks at our pathetic surrender in Afghanistan, leaving behind dead Soldiers, American citizens, and $85 billion worth of Military equipment. He then looks at Biden. He is not worried!”

Ahead of the Putin call, Biden on Monday spoke with leaders of the United Kingdom, France, Germany and Italy to coordinate messaging and potential sanctions. He also to spoke with them again on Tuesday following his call with Putin to brief them out the outcome. Biden is also expected to speak with Ukrainian President Volodymyr Zelenskyy on Thursday, Sullivan said.

Putin apparently sees the current situation as a moment to readjust the power dynamic of the U.S.-Russia relationship, analysts say. “It is about fundamental principles established 30 years ago for the relations between Russia and the West,” said Fyodor Lukyanov, a leading Moscow-based foreign policy expert.

Beyond Ukraine, there are plenty of other thorny issues on the table, including cyberattacks and human rights. Before the call, Kremlin spokesman Peskov said U.S.-Russian relations are overall in “a rather dire state.”

“Russia has never planned to attack anyone,” Peskov said. He characterized the Biden-Putin call as a “working conversation during a very difficult period,” when “escalation of tensions in Europe is off the scale, extraordinary.”