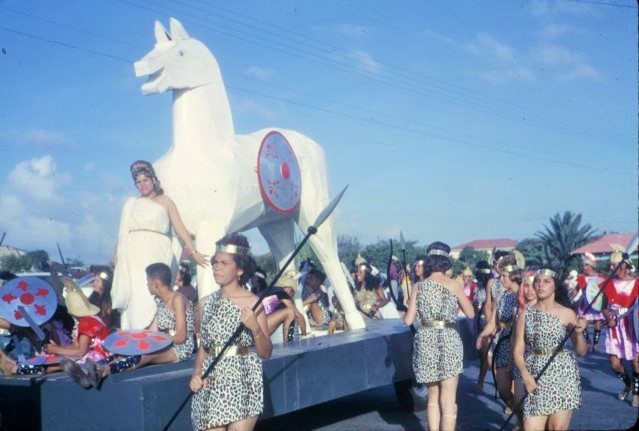 Maximiliano Francisco Arends, better known as Bibi Arends, was involved in Aruba’s Carnival from a young age. He was also the presi 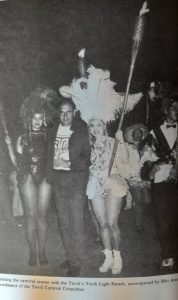 dent of Club Tivoli, which was located in Whilhelminastraat during the 50s and 60s.

In a special interview with our reporter, Arends mentioned that the house in which he was born was next to the Aruba Tivoli Club, a club which was established in 1921 as Aruba Dance Club and later changed its name, got a new building – and years later was dismantled.

From a young age, before the World War II, Arends would see that there was a lot of activity at the Aruba Tivoli Club because a lot of the members travelled to Europe and would bring back the Venice-style of Carnival, “which is very luxurious and used a lot of masks, which was ideal back then because a lot of the members belonged to the elite in the community as doctors and lawyers, and by wearing the mask they would not be recognized and could just enjoy with everyone else”, he said. 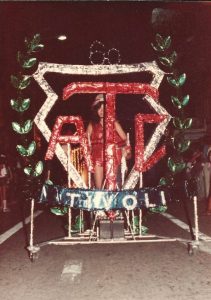 With the passing of time, the club became bigger, but the war paralyzed everything. And when things picked back up, people went on the streets mainly only with the queens on a convertible. After a while, more clubs like Caribe Club, Watapana Club and Club Viceroy joined and they began using cars and trucks. “This was more like a Queen parade in convertible cars in 1946, and it scaled up with music trucks with the old Carnival song of Calipso, composed by Rufo Wever and Padu del Caribe – composers of Aruba’s national anthem, Aruba Dushi Tera – and interpreted by Edwin Zichem. Back then the song was played by various bands on the trucks.”

As more people joined the parades became bigger. Around 1954, the president of Tivoli realized that there were a lot of carnival celebrations around Aruba, like steelband which began in San Nicolas, and the Chinese club which also began participating in carnival in San Nicolas.

Because of this, Arends called for all clubs to come together and agree to organize a general carnival with the idea of celebrating carnival in Oranjestad and San Nicolas.

“Back then carnival was very different, there was a lot more coming together of the groups, organizations and families that worked on carnival items like headpieces, would sew all costumes and everything was almost free because people would come together. It was like a cultural-social event, where one would come with a couple of cases of beer, another with a cake, and people were happy. This doesn’t exist anymore,” Arends commented.

Tivoli started with various things like Fakkeloptocht and Miss Carnival back then. And in 1980, the organization in charge of the general carnival, Central Commission of Carnival of Aruba (CCCA), which later became the Foundation of Aruba’s Carnival (SAC), was asked to organize a carnival at night, “because Tivoli’s people would see the beautiful carnival lights at Disney World Orlando and wanted to introduce it in Aruba”, according to Arends.

In 1981, Tivoli was to celebrate its 60th anniversary, and they agreed to organize the parade at night, something that back then was dangerous and not allowed by police. But it went through and became such a success that for the second time, people were so happy with Lighting Parade that they forced it to include steelband, super dancers, brass band and groups from abroad.

Back then, to be part of a carnival parade one had to pay 100 florins, then it went to 75 florins and ended at 50 florins. The groups started getting big with people that were not members, and this resulted in a massive participation as it is now. And this caused the closure of Club Tivoli, since they didn’t have funds anymore, and hotels were offering other entertainment activities.

“At the change of the century a new situation grew in Aruba and the world with scientific progress and technology. People’s character changed and things started becoming more commercial, and carnival became more about money. Carnival became very expensive these years, you need to pay at least 12,000 florins for the band alone and it’s getting worse. With all respect to today’s carnival, but you go online, you find a group, you register on your computer, you receive your drinks ticket and you go dance”, he explained.

Since the year 2000, according to Arends, the luxury, beauty and greatness of carnival began decreasing – less luxury, less fantasy and creativity. It became more commercial.

He said that he lived and enjoyed the carnivals of yesteryear, up until 2009. “I am afraid that at some point carnival will collapse and break itself because you cannot afford it. Situation is improving after the pandemic, it’s true, but the value of money is decreasing and you cannot purchase everything necessary nowadays for carnival.”

The good news that Arends has been observing the last few years is that organizations, like hotel personnel or private companies, began doing carnival the old style. “They get together after work, they make their carnival stuff and have a party before the big parade. Even the neighborhood centers are developing, like the one at Noord that has the Sunset Parade with a beautiful steelband and everything handmade, expressing Aruba’s culture and tradition.
He sees this positively. “If those are not paid, we recreate and reactivate our carnival in the style of the old days, which was very creative, very social and very cultural”, he said.