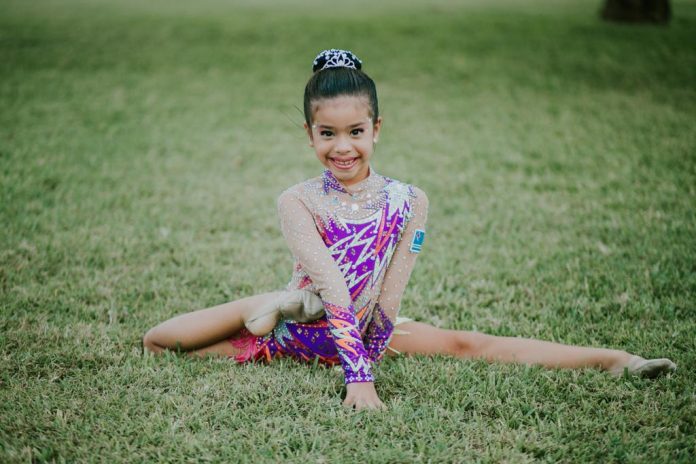 Ashley Urbaneja is an 11-year-old girl who stands out in the discipline of rhythmic gymnastics. During a special interview with our reporter, Ashley together with her mother, Mariana Urbaneja shared about her career in gymnastics, her achievements, and her dreams for the future.

Ashley began her career in rhythmic gymnastics when she was only three and a half years old. She was born in Maracay, Venezuela, and began her training at the Club Alfa under the direction of coach Orquidia Ramos.
Ashley’s mother explains that through different evaluations and internal as well as state competitions, the coach noticed that Ashley has important qualities to succeed in this sport. After some years, when she was almost seven years old, Ashley together with her mother left their country and came to Aruba to reunite with Ashley;s father, who was already living and working in Aruba.

“We are extremely thankful to the island for all the opportunities that we have received, especially for Ashley”, Mrs. Urbaneja expressed.

She said that after their arrival in Aruba right away they began researching for rhythmic gymnastics clubs in Aruba, and they found the club Avanse. Here, coach Adriana Sevilla carried out all the necessary evaluations, and Ashley showed her talent and qualities which she had learned during her training in Venezuela.

Ashley’s first international competition representing Aruba was in June 2018, which took place in Costa Rica, where Ashley managed to win the first gold medal in rhythmic gymnastics for Aruba.

“This was a big incentive for Ashley as well as for the Aruban community because through the achievements of Aruba during this competition, the discipline of rhythmic gymnastics became better known and more popular”, Urbaneja explained.

During the month of May in 2019, Ashley together with the Aruban rhythmic gymnastics delegation traveled to Miami for the international competition of Rhythmic Art, where once again Ashley stood out and brought several medals for Aruba. “Ashley won the gold medal in the freestyle category, silver medal in hoop, and bronze in all-around. She was the only athlete from Aruba who got on the podium, a big source of pride for us”, Urbaneja said.

That same year, during the international competition Cup of Aruba, where more than eleven countries came to Aruba to compete, Ashley once again went on the podium by winning silver and a bronze medal for Aruba.

During the last competition that took place in Aruba, the International Cup Aruba, Ashley had an excellent performance once again representing Aruba. “I want to emphasize how proud we are as family, as fundamental pillars in her development and education. We are also extremely thankful to her coach Adriana Sevilla”, Mariana Urbaneja said.

“I believe that her perseverance, responsibility, focus and love for gymnastics allowed [Ashley] to reach where she is now. She always says that her main wish is to become a professional gymnast, and these qualities continue helping her to advance in her sport”, she added.

On the other hand, Urbaneja explains, there are some limitations due to the fact that a Latin child is representing Aruba. For example, there are South or Central American competitions where Ashley cannot represent Aruba because she doesn’t have a Dutch passport.

Mrs. Urbaneja commented that Aruba has a lot of prospects in sport. Just as there are many Aruban natives, there are also many Latin sportspeople who could represent Aruba and make Aruba’s name shine internationally, but regrettably these opportunities are limited.

“I hope that in the future there can be an opportunity, and a project together with Ministry of Sport and the Government of Aruba that could give these kids, who love Aruba and love their sport, the opportunity to represent Aruba officially in other international competitions”, she added.

Urbaneja explained that because of not having a Dutch passport, during the award ceremony for Excellence in Sport, Ashley was the only child in her team who could not be considered for an award. “This was something that really affected and hurt Ashley because she loves Aruba with all her heart, and she carries the flag in her heart when the time comes to represent Aruba in her sport.”

Finalizing, Ashley thanked everyone who one way or another helped and helps her grow in her sport. “Everything I am and where I am today, I thank my parents, my grandma in heaven, my family in Venezuela. They are all important for me, bur someone else who is very important in my life is God, nothing would be possible without Him. I want to achieve my dream and represent Aruba in rhythmic gymnastics at the Olympics. I love exchanging experiences with children from other countries because it lets me learn new techniques and demand more of myself to improve.”

Today’s Happening; A selection of where to go while in Aruba.